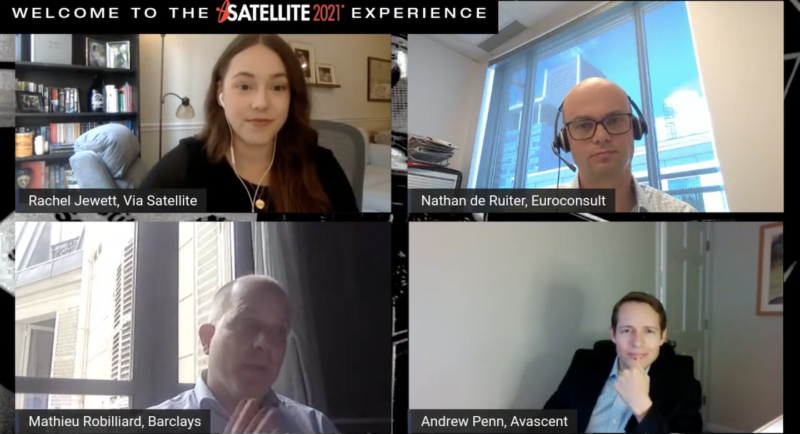 Despite buzz around growth in satellite services, revenue for this segment of the satellite industry is predicted to be virtually flat through 2025, according to Euroconsult figures. Nathan de Ruiter, Euroconsult’s managing director of Canada discussed industry financials in a panel with analysts from Barclays and Avascent during SATELLITE 2021 Future Space Forum on July 28.

Some of the small growth comes from fixed broadband. De Ruiter says Euroconsult expects this market to be worth around $27 billion in 2025. It was worth around $13 billion in 2015, so this segment could post more than 100% growth over 10 years.

Video still represents the lion’s share of satellite industry revenues, but the decline in revenue for this segment in stark. In 2015, video revenues accounted for $107 billion, which represented over 85% of the total market. In 2025, Euroconsult expects this figure to go down to $92 billion, and represent just over 70% of the total market.

“People forget the importance of video. There is definitely growth in the data side, but it is offset by the reduction of video. The economics are getting there. But, the challenge is really the execution on the ground,” de Ruiter said. “You have the big markets in the U.S. Outside of the U.S., no satellite players have been successful in the fixed broadband market. If the satellite operators can move closer into the service layer, they can scale up more quickly.”

He pointed to large investment happening in the space sector with new Low-Earth Orbit (LEO) constellations. The panel was asked how many players can the market sustain, particularly businesses that are looking to reduce the digital divide. While de Ruiter expects the markets to maintain a number of players, he says it is difficult to determine which ones will be financially successful.

Andrew Penn, director of the space practice for Avascent added: “It is not one to two startups trying to solve this, there are a number of companies trying to solve this. I hope one or two will break this economic curve. In the near term, you might have three to four companies active. It is a struggle [for] all make money in the short term. In the long-term, there could be enough to sustain three to four players.”

Mathieu Robilliard, director of equity research for Barclays, said that while the satellite industry is not well understood by investors because it is small and highly technical, operators have a chance to reinvent themselves to reap greater benefits in the future telecoms ecosystem.

“We are seeing good growth opportunities. I like to remind investors that the satellite industry is very small. There is a role for satellite to play. It is one of the only solutions to cover the globe. It is becoming more efficient,” said Robilliard.

Robilliard compared the current period in the space industry to the start of the internet, when companies rushed to participate in the boom. “As the cost of launch comes down, the telecom satellite players become more competitive and affordable in regards to terrestrial infrastructure,” he said. “There are so many opportunities to chase. Not all the players will be winners. I like to make a parallel to the beginning of the internet when there were hundreds of companies … A lot of them have failed, but 20 years after, we have incredible success stories.”