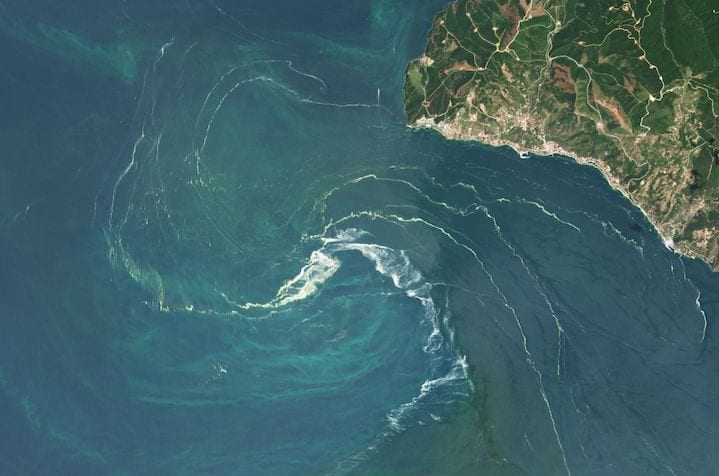 A Phytoplankton swirl in the Sea of Marmara in June 2021. Photo:

New Space Earth Observation (EO) leader Planet is going public through a merger with a special purpose acquisition company (SPAC), the company announced July 7. Planet will combine with dMY Technology Group, Inc. IV in a deal that values the company at $2.8 billion.

The transaction is expected to bring $435 million in net proceeds, and includes a $200 million PIPE, led by funds and accounts managed by BlackRock, with participation including Koch Strategic Platforms and Marc Benioff’s TIME Ventures and existing Planet investor Google.

Planet is an established New Space company to join the list of space SPACs that includes Rocket Lab, AST SpaceMobile, and Spire. The company was founded in 2010 and has disrupted the satellite imagery arena that had previously been the domain of large Geostationary (GEO) satellites built by Airbus and Maxar Technologies.

The company has approximately 200 satellites in orbit. Part of its fleet images the entire landmass of Earth landmass every day at 3 m to 5 m resolution, and another 21 satellites that are higher resolution satellites can capture imagery of any area at 50 cm resolution.

“As the world shifts to a more sustainable economy and more companies and governments set their sustainability and ESG [environmental, social, and governance] goals, the first step in achieving these objectives is measurement. Planet’s daily, global data is foundational to making that transition. We’re excited to reach this important milestone of taking Planet public to significantly accelerate our mission,” Planet CEO and co-founder Will Marshall commented in the release.

According to the presentation, the largest portion of Planet’s revenue in 2021 — 24% — comes from civil customers, followed by defense and intelligence at 22%, agriculture at 23%, and mapping at 17%.

This news comes a day after competitor Satellogic announced its own SPAC plans. Satellogic is another EO startup. Along with BlackSky, three satellite imagery startups have announced plans to become publicly traded companies.