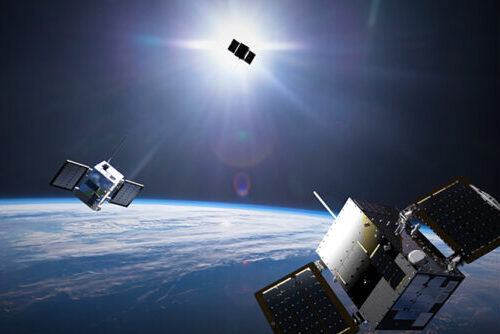 HawkEye’s second cluster of RF satellites have been deployed to orbit. Photo: HawkEye 360

The company said this funding will support the development and launch of three additional satellite clusters to expand the HawkEye constellation. The company is planning to have a fully deployed constellation by the end of 2022, with nine next-generation satellite clusters in orbit. HawkEye said the funding will also support ground infrastructure, communications, and software.

HawkEye recently commissioned a trio of “Cluster 2” satellites that were launched in January on SpaceX’s rideshare mission.

The company was the first to offer commercially available RF tracking data after it launched its Pathfinder cluster of three satellites in 2018. These satellites can track and geo-locate RF signals — anything that emits a signal across a broad range of emitters from VHF marine radios, UHF push-to-talk radios, maritime radar systems, AIS beacons, and L-band satellite devices. One example of this in action is tracking X-band and S-band radar on dark maritime vessels.

“Satellite technology is the next frontier in today’s digital world,” commented investor Dave DeWalt, NightDragon founder. “NightDragon is proud to invest in HawkEye 360, which leads the way in commercial RF-sensing satellites. Filling this knowledge gap will allow governments, companies, and organizations to maximize their digital ecosystems.”