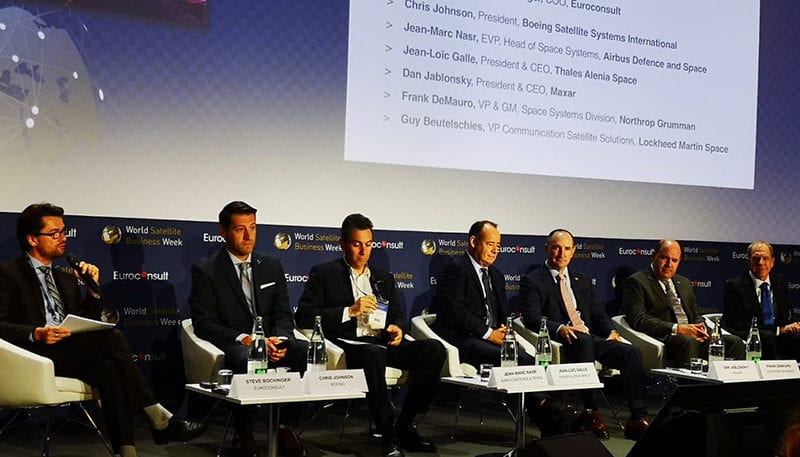 Satellite manufacturers are entering a new world, according to a panel at World Satellite Business Week (WSBW) in Paris last week. Chris Johnson, president, Boeing Satellite Systems International, admitted that that the satellite manufacturing industry stands at the precipice of a number of significant opportunities. “It has been a challenging market over the last few years. The Geostationary Orbit (GEO) market has not come back. It does not mean it is not critical. Everyone else has shifted towards what might be the future. Everyone has done things in Non-Geostationary Orbit (NGSO). We are starting to build mPOWER for SES. We had a vision. It is really exciting on where we are going to be. The industry have been asking us for standards, flexible. It is a much more challenged environment,” he said.

Guy Beutelschies, vice president of communication, satellite solutions, Lockheed Martin Space, stood out from the crowd on the panel. He emphasized that with more flexible satellites going up in the future, the importance of security will increase — and he felt this was an area where Lockheed Martin could gain a competitive advantage. He added, “There are new vulnerabilities. Security is going to come more and more important. Government is extremely high on secure satellites. If we can re-program a satellite on orbit, then someone else can do it too. We are seeing things like Denial of Service, Ransomware, imagine that happening to a network. It is not just larger nation states that can do that. We see security and resiliency is vitally important. It is not just about adding capability.”

Jean-Marc Nasr, executive vice president, head of space systems, Airbus Defense and Space, said that the satellite business within Airbus is changing. Whereas the company used to have very segmented markets (aircraft, space, helicopters), it is now seeing convergence. “We see a need for connectivity everywhere. TV broadcast is not going to grow. We see the market still moving, but slowly moving. There will still be a need for big GEO satellites. The constellations will start to be there. We created the OneSat product (a fully reconfigurable satellite platform). This will change the way we do things. Laser communications will be key for the future. The partnership with service companies with key. We are at the beginnings of new growth,” he said.

Like Beutelschies, he also emphasized security. He said, “The key question is around the security of the supply chain. We have to be very careful on safety and risk. If you have one satellite failure, it can impact the entire constellation.”

Frank DeMauro, vice president and general manager, space systems division, Northrop Grumman, talked about the in-orbit satellite servicing markets and possible developments here. However, with its Mission Extension Vehicles (MEVs) now at the launch site, and the company ready to get to work for the likes of Intelsat, there could be significant breakthroughs in this technology over the next few months. He said, “There has been a ‘wait and see’ attitude from customers towards on orbit satellite servicing. We think the MEV has a role to play. But, we are also looking at different vehicles such as Mission Extension Pods which offer a lower price point, but not quite the same capabilities. We are developing in-orbit robotics, so we can rendez-vous with a satellite, replace components through a standard interface. We hope to get that going in the first part of next year. We need to see the business case play out. We think the opportunity is on the higher side (for in orbit satellite servicing).”

Jean-Loic Galle, president and CEO, Thales Alenia Space, analyzed different parts of the market saying he felt the biggest opportunity for the company was fully flexible and reconfigurable GEO satellites, and the market where he sees the least risk.

Dan Jablonsky, president ans CEO, Maxar admitted that both Maxar and the industry had undergone a significant transformation. “This is much more than a satellite manufacturers panel. All the companies here do a lot more,” he said. He said small satellite constellations such as Starlink or Kuiper are likely to be gamechangers for the industry. Like DeMauro, he was also optimistic for the future of in-orbit satellite servicing. “We were fairly high on the opportunity as well as the risk in terms of on-orbit servicing. There is some point where it makes a lot of sense. The economics are key in order to make this work.”