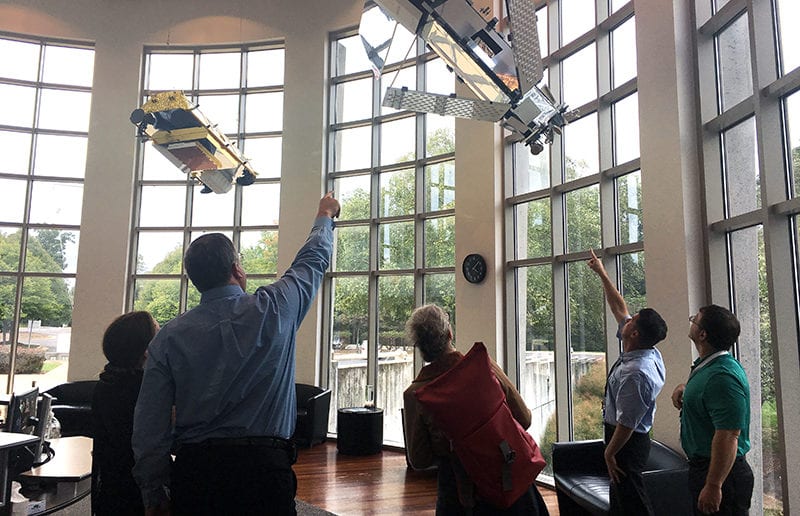 A majority of analysts and stakeholders logged off of Iridium’s March 7 Investor Day webcast with smiles after the Virginia-based satellite operator revised its full-year 2019 service revenue and EBITDA guidance upward to $440 million and $330 million, respectively.

Quilty Analytics Founder and Partner Chris Quilty summarized the four-hour long webcast — Iridium’s first in four years — as a victory lap for a satellite operator that has effectively remained one step ahead of the Low Earth Orbit (LEO) constellation market. “[This year] was indeed a very good year for Iridium (financially and operationally), and 2019 is also off to a good start with the completion of the Next constellation and the imminent launch of Aireon services this month,” said Quilty in a report. “What’s next? Years of worrying over rickety satellites, rocket launches, and balance sheet liquidity are now a thing of the past and Iridium is squarely focused on its growth strategy.”

The new forecast came just a little more a week after Iridium reported a remarkably strong close to its 2018 fiscal year. Iridium’s 2018 fourth quarter was its 11th consecutive fiscal period of double-digit subscriber growth and its seventh consecutive revenue — and EBITDA forecast-beating performance —beating market estimates by 3.3 percent and 2.8 percent, respectively. The operator launched its last remaining Next constellation satellites in January, filling out a global network of 66 active and operational LEO communications satellites.

According to Quilty, the most important takeaways from Iridium’s 2019 investor day event were substantial dividend upside from Iridium Aireon and Satelles technologies, and the company management’s belief that the network can support $1 billion in revenues.

Satelles holds more than 40 patents for the “Satellite Time and Location” (STL) technology it has been developing with Iridium, which is an equity holder, during the past nine years. STL provides assured Positioning, Navigation, and Timing (PNT) and cybersecurity capabilities for defense, enterprise, and transportation markets. Iridium is set to activate its Aireon service over the Northern Canada and North Atlantic this year, providing service to approximately 1,500 flight routes. “Aireon represents a $750 million revenue opportunity comprised of air traffic surveillance [more than $600 million in revenue] and commercial data [between $100 million and $200 million],” said Quilty.

Iridium’s Certus broadband service also launched into operations in January with more than half of its channel partners already offering the service to customers. Iridium management said it believes Certus will generate $75 million in incremental broadband revenues by 2021, primarily driven by activity in the maritime sector. Raymond James’ Ric Prentiss shares Quilty’s enthusiasm, and set a $25.00 price target and “buy” rating on the technology company’s stock. Zacks Investment Research changed its rating for Iridium from a “hold” to “buy” rating, with a slightly lower price target at $24.00 per share.

To help deliver on promises and meet investor expectations, Iridium brought back veteran industry and former executive Suzi McBride as its new Chief Operating Officer (COO). Prior to rejoining Iridium, McBride spent the past two-and-a-half years at OneWeb, where she built up OneWeb’s team of engineers and oversaw the system design, production and testing of the ground and space networks as well as user terminal development. Now officially in her new role, McBride will lead operations of the Iridium network, including the satellite constellation and associated ground gateways and terminals. This also encompasses all technology innovation on Iridium’s new network, including the development and manufacturing of subscriber equipment, new services, and applications.

In an interview with Via Satellite(which will be published in full later this month), McBride was asked to identify her two most important objectives in helping Iridium maintain and build on momentum. “One, is getting the team to shift gears,” she said. “More specifically, shifting the team and the focus away from what we just accomplished with Next — which was phenomenal — to the next layer. What’s the next big thing? Second, I want the team to focus on operational excellence. How do we take the system and find ways to be creative — like how did with our first system, Block 1? We found new services and products that were never imagined. So, it’s about taking this to the next level, and working with the team to shift their gears and thinking, and to be creative in how we can expand even further on what we’ve already put in place.”