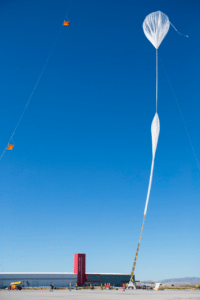 World View, which plans to offer services such as Earth Observation (EO) from the stratosphere using high altitude balloons, has successfully completed its first Stratollite launch from its Tuscon, Arizona headquarters.

According to the Arizona Daily Star, The Federal Aviation Administration (FAA) recently granted the company a certificate of authorization to launch from Spaceport Tuscon, which World View Chief Executive Officer (CEO) Jane Poynter described as the “first-ever, purpose-built stratospheric launch facility in the world.” This launch marks the beginning of operations at the spaceport, where World View will launch and manufacture most of its balloons.

World View aims to use Stratollite balloons to fly commercial payloads at a lower cost than Low Earth Orbit (LEO) satellites. According to the company, the Stratollites can support applications such as weather forecasting, communications systems for emergency first response, remote sensing and scientific research.

The company made headlines earlier this year when it lofted a fried chicken sandwich on a test flight as part of an ad campaign for KFC.