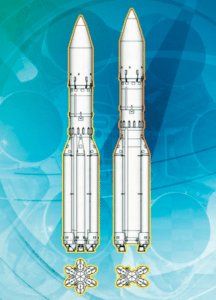 [Via Satellite 10-12-2016] Eutelsat has revealed that the third launch in its Multi-Launch Agreement (MLA) with International Launch Services (ILS) will use a Proton Medium rocket, making the operator the first to commit to using one of the new launch vehicle variants. The mission is to occur in the 2019 to 2020 timeframe from the Baikonur Cosmodrome in Kazakhstan.

The Proton Medium mission is the second Eutelsat launch contract announced this week. Yesterday the operator revealed that the newly ordered Eutelsat West 5 B will launch on a Proton Breeze M rocket, also from ILS, on a shared launch with Orbital ATK’s first Mission Extension Vehicle (MEV 1). Eutelsat 5 West B will be stacked on top of MEV 1 for a dual launch in the last quarter of 2018.

Eutelsat has so far conducted one launch under the MLA — Eutelsat 9B on Jan. 30 this year. The MLA is designed to provide Eutelsat with schedule flexibility and assured access to space at cost effective prices over a seven-year period.

“Our agreements with ILS are aligned with our plans for fleet expansion and our commitment to control capital expenditure. We commend Khrunichev for the new expanded line of Proton vehicles that should bring added diversity in more segments of the commercial launch market,” said Rodolphe Belmer, CEO of Eutelsat.