[Via Satellite 03-23-2016] Zero2infinity, a high altitude balloon company based in Spain, is making progress on the development of a launch vehicle that uses the combination of a balloon and a rocket to deliver small satellites to Low Earth Orbit (LEO). Called Bloostar, the vehicle’s baseline design aims at carrying 75-kilogram payloads to a 600-kilometer Sun-Synchronous Orbit (SSO) for a price tag of about $4.5 million (4 million euros). The vehicle’s first orbital mission is currently slated for the second half of 2018, preceded by numerous suborbital development launches.

Bloostar has generated a healthy amount of interest from companies in the small satellite community. Jose Mariano Lopez-Urdiales, founder and CEO of Zero2infinity, told Via Satellite the project already has letters of intent worth roughly $268.4 million (240 million euros), which constitutes enough demand to move forward with developing the system.

The logic behind Bloostar is that once the balloon carrying the payload reaches the stratosphere, it will have cleared more than 99 percent of the atmosphere, at which point a streamlined rocket can carry payloads the rest of the way to space. Lopez-Urdiales said the Bloostar rocket component would have an order of magnitude fewer parts than something launched from sea level. By shedding this complexity, Zero2infinity hopes to offer a unique and competitive dedicated SmallSat launch service.

The idea of a rocket-balloon combo, or “rockoon,” is not new and was originally developed during the late 1950s, shortly after Sputnik, but did not suit the needs of a military-driven space race. Lopez-Urdiales said the idea to resurrect this concept in modern times came from the Venus Sample Return (VSR) mission that the European Space Agency (ESA) considered in the 1990s. Lopez-Urdiales’ father was working on the study at the time.

“The idea was to send a probe to Venus, grab samples from the soil and the atmosphere, and send it up to another probe that would catch it and bring it back to the Earth. That was a project that didn’t get funded, but they did some studies about the feasibility of launching from Venus with a rocket, and it was soon very clear that the most effective way was using a balloon,” he said.

Lopez-Urdiales said Zero2infinity had the notion of transferring this capability to launch small satellites from Earth a while ago, but at the time there was not a sufficient market to support such a launch system. Now, because of the significant uptick in small satellite activity, the company is pursuing Bloostar.

Zero2infinity’s primary business currently involves high-altitude ballooning for a variety of customers. Lopez-Urdiales said the company has been launching high-altitude balloon payloads for the past six years, and that many aspects of that business — trajectory modeling software, separation systems, termination systems, pressurized payloads and telemetry — share a fair amount of commonality with Bloostar. The company is hard at work on the rocket today.

“We have had ignitions of scaled versions of the rocket, we are modeling the rockets on computers, and are moving forward with larger versions. These rockets are not the usual turbo-pump fed engines that you would have on the first stage. They are pressure fed, operating in an almost-vacuum because the balloon is carrying the payload to almost-vacuum. Creating a pressure-fed rocket that that works in a vacuum is the simplest type of rocket you can make. From the ground you need turbo-pumps to get decent pressure in the chambers and specific impulse,” he explained. 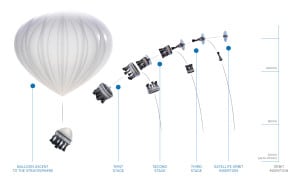 By the end of the year, Zero2infinity is aiming to launch a balloon from the sea as well as to launch a rocket from a balloon. Bloostar is planning missions from the Canary Islands, a Spanish archipelago off the coast of Morocco, using either a boat or a floating barge. Lopez-Urdiales said the company has launched big balloons from the ground using cranes, and has people on its team that have launched from sea, but as a company it has not attempted the combination. From the Canary Islands, Lopez-Urdiales said Bloostar can reach almost any orbit and the wind conditions are typically calm and predictable. Also, because Zero2infinity is located in Spain, the company can relocate the boat or barge to coastal areas with high demand, such as the U.S. or China, he said.

Lopez-Urdiales is not worried that balloons impose an additional risk compared to other launch methods. He said that if a balloon fails, the company could likely retrieve the payload by doing a soft landing over the sea, similar to what SpaceX has done with the Falcon 9. The exception would be missions in U.S. waters, where he said Federal Aviation Administration policy would require self-destruction in the case of a launch failure.

“You can make the balloon as reliable as you want to spend money, but they are already reliable,” he said. “The reliability is in the high 90 percents. There is debate between 99 percent and 97 percent. High-altitude balloons can be done reliably for a short period of time. Having a balloon work for many days or weeks is harder … but for a less than an hour balloon flight, it is really the last of my concerns.”

Lopez-Urdiales said Bloostar could continue to evolve to accommodate larger or smaller payloads than the nominal 75kg to SSO depending on demand. The company is also considering reusability early on in development.

“Bloostar has been designed to be reusable, technically, but not as part of the business plan,” said Lopez-Urdiales. “The engines burn methane and oxygen for many reasons, but one is that it creates less soot and leaves the engines reusable. Also, the shape of a torus has been selected to reduce the aero-heating on reentry. The optimal shape in vacuum is similar to the optimal shape for reentry (blunt). The optimal shape for ascent is very different (slender). Bloostar has been designed from its ignition taking into account ‘the way back down.’ It’s easier to do if the ‘way up’ is taken care of by the balloon.”

Zero2infinity is not talking to new investors at the moment, having already collected investments as well as gaining revenues from its ballooning business. Lopez-Urdiales said the company priced Bloostar to be similar to the cost of a secondary payload, with customers instead getting to be the primary mission. If the market proves competitive, he said pricing could go down. Zero2infinity also offers discounts for batches of launches.

“We don’t need to launch many to keep the company in a healthy financial situation, because there is no range by the sea to rent, or aircraft to be bought. It is less capital intensive and can be quite successful even if we launch very few [missions] a year. We foresee from the market a ramp up to possibly 40 launches a year by 2025 or so. That’s something we think is possible,” he said.