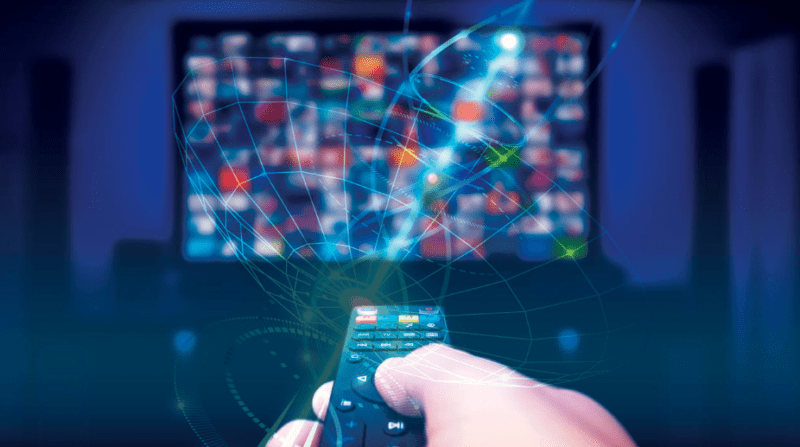 Satellite pay-TV subscription numbers in the Middle East countries in the Gulf Cooperation Council (GCC) are experiencing a sharp drop-off over the past few years, according to a new report “GCC Video & Broadband Distribution 2020” from Media Partners Asia (MPA), which is known for research on Asian broadcast markets.

MPA Vice President Aravind Venugopal told Via Satellite in an interview that the numbers have dropped by over 25% the last few years. In 2015, the Direct-to-Home (DTH) subscriber base was just shy of 1 million subscribers in the GCC territories (Saudi Arabia, Kuwait, the United Arab Emirates, Qatar, Bahrain, and Oman). MPA reports this has now declined to around 700,000 subscribers, and a large part of the decline has come from UAE, Qatar, and Saudi Arabia.

“The largest decline has been in Saudi Arabia, with many households leaving the pay TV ecosystem because of piracy, and the fact that beIN has had to cease operations because of the Qatar blockade. While piracy is definitely to blame for some of the decline in the region, I believe there’s been a lack of innovation amongst pay-TV operators as well. Combined with the launch of cheaper priced SVOD [Subscription Video on Demand] services — consumers look at the DTH proposition and see a value deficit,” Venugopal said.

It is clear that the growth of Internet Protocol TV (IPTV) in the GCC territories has begun to impact the demand for satellite. According to MPA’s research, in 2015, in the GCC countries, IPTV and DTH were about equal in terms of numbers of subscribers. At the time, IPTV accounted for around 800,000 subscribers, but is now at around 1.2 million subscribers. DTH’s loss has been IPTV’s gain, with many households in the region attracted to triple play bundles from telcos.

Venugopal said a traditional satellite pay-TV operator such as OSN will have to look at how they reposition its business. He points to the fact that there are still markets that lack fixed broadband services, or the availability and speeds and quality is still limited. These areas are primarily where DTH has a role to play. Also, older households are still largely Free-to-Air (FTA) and skewed toward traditional linear TV, and there’s still demand for DTH among this group of consumers. But, Venugopal believes these demographics are shrinking by the day.

“In the GCC, approximately 60% of the population is under 35 years old. OSN’s new service, Yahala, which they have launched in Egypt is a $10 proposition, targeted at this FTA-first, older demo who aren’t or can’t afford the full-priced pay-TV service. It’s still early days — it remains to be seen how this scales, and whether there will be cannibalization between that product and the more expensive premium DTH service in the longer term. But it’s a welcome first step, and perhaps one that OSN needs to take to shore up its subscriber base,” he said. 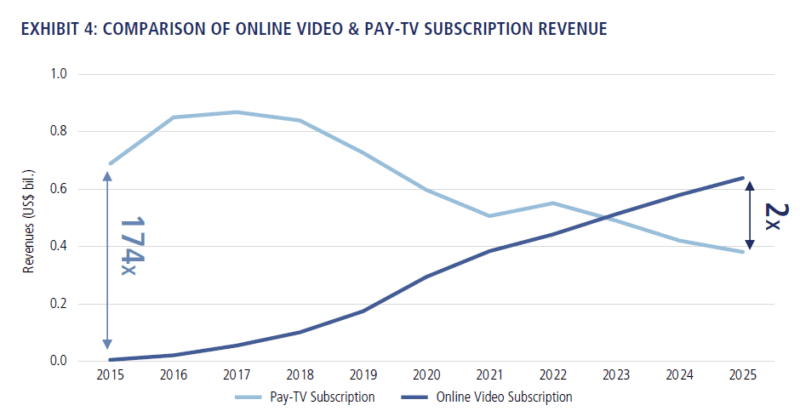 Venugopal calls the decline for satellite in this region quite stark even when compared to Asia. This decline has been pronounced particularly over the last two years, even compared to other regions and markets.

“The pay-TV industry in the GCC territories has been buoyed by hard bundle offered by the telcos, where IPTV is hard bundled with fixed broadband and telephony. The day that bundle breaks, I suspect you will start to see significant declines in the subscriber numbers as consumers start to get a choice. For instance, the largest telco in the UAE and one of the largest IPTV operators by subscriber numbers, Etisalat, still offers a hard bundle,” he said.

MPA is well known for its research in Asia and is in a unique position to compare the Asian markets against those in the Middle East. In Asia, Venugopal admits they are seeing a decline in the number of channels, and this will naturally lead to a decline in the demand for satellite capacity over time. Over the years, the number of DTH operators in the region has steadily declined, and there has been a few of rounds of consolidation and closure.

“My sense is that the [GCC] region can support no more than two or three DTH pay-TV platforms. Platforms are also looking to significantly cut costs, including on the content front, and I suspect we will start to see a number of channel closures in the next few years as both global and regional players start to trim their linear channel portfolio, or move some genres and segments to VOD. There will definitely be an impact on the satellite industry, including on transponder demand and pricing. In Asia, for instance, we’ve already seen a decline in transponder pricing in broadcasting in the past few years, and I wouldn’t be surprised if this trend is mirrored in the GCC,” Venugopal says.

While the broadcast market could continue to see steady declines for satellite players in the region, the broadband market could be on the up. Venugopal cites the example of Oman as a potential barometer of where satellite can get involved. In Oman, there is Oman Broadband which is the national broadband network in Oman. The venture is looking at deploying satellite broadband in areas that cannot be reached by fiber in an economically feasible way.

“In some parts of the region, especially in large expansive countries like Saudi Arabia and Oman, it can be expensive to get fiber to many of the remote villages and provinces. The demand in these areas will need to be met by either fixed wireless and or satellite. While Saudi has already embarked on a fiber-based national broadband network rollout, I would not be surprised if [Saudi Arabia] looks at satellite broadband as an alternative to some of the far-flung areas. Oman is also considering using satellite broadband, and signed an agreement earlier this year to commence work on that front. However, it remains to be seen what the economics of satellite broadband are, and its role in the long term as 5G deployments start gaining pace,” Venugopal said.