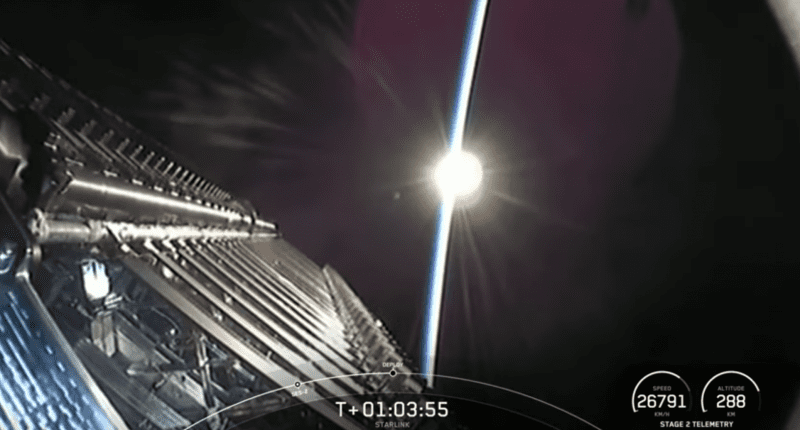 The FCC has granted SpaceX permission to lower the altitude of future satellites in the Starlink Low-Earth Orbit (LEO) constellation. The FCC’s decision, announced Tuesday, came despite protests from Viasat, Amazon, SES, and other satellite competitors.

The license modification allows SpaceX to change the altitude for 2,814 future Starlink satellites, from the 1,100-1,300 km range to the 540-570 km range. It also modifies the final size of the Starlink constellation by one satellite from 4,409 to 4,408. SpaceX just under 1,400 satellites in orbit at this point.

Starlink is a constellation of satellites designed to provide broadband internet to un-served and under-served areas. The FCC decided that approving the modification was in the public interest because it will improve user experience in underserved polar regions.

Modifying SpaceX’s license “will improve service to remote and underserved areas, including polar regions, and will facilitate the deployment of the Starlink system overall. We conclude that operations at the lower altitude will have beneficial effects with respect to orbital debris mitigation. We also find that SpaceX’s modification will not present significant interference problems,” the FCC wrote.

This approval comes despite protests from Viasat, SES, Amazon for Project Kuiper, Kepler Communications, and Dish Network for interference concerns, and orbital debris and environmental issues.

According to the order, the FCC saw SpaceX’s plans to mitigate orbital debris as sufficient, and SpaceX is ordered to accept any additional interference that results from this modification. Viasat in particular had requested an environmental impact statement on Starlink, which the FCC did not see as necessary.

On the orbital debris issue, SpaceX must provide a twice-yearly report with the number of conjunction events and satellites that were removed from operation, re-entered the atmosphere, and/or satellites that had a disposal failure.

The FCC order also included an interesting discussion on the failure rate of Starlink satellites, which the FCC noted “is a matter of significant contention in the record.” According to the document, SpaceX deploys most of its Starlink satellites into a low orbit in the 350 km range so that any spacecraft that do not have maneuver capability can quickly re-enter the atmosphere.

SpaceX defines a truly failed satellites as one that loses maneuverability at a higher altitudes, which makes it an anomaly that presents a collision risk.

SpaceX provided data to the FCC updated to April 2, 2021 that self-reports out of 1383 satellites, there have been 20 disposal failures, plus 7 satellites “screened” at low altitude immediately post-launch, and 16 additional satellites deorbited early. This does not count the first 60 prototype Starlink satellites launched, which are being deorbited. Only 10 prototype satellites remained in orbit as of April 9, 2021.

An Amazon spokesperson issued a statement on the decision: “This is a positive outcome that places clear conditions on SpaceX, including requirements that it remain below 580 km and accept additional interference resulting from its redesign. These conditions address our primary concerns regarding space safety and interference.”

John Janka, chief officer of Global Regulatory & Government Affairs at Viasat praised the FCC for recognizing that Starlink satellites must be reliable and safe, but expressed disappointment that the FCC declined an environmental assessment.

“We doubt that other countries will follow the FCC’s approach to providing near-exclusive use of limited LEO orbits and spectrum that, by necessity, must be shared by multiple LEO systems. We are disappointed that the commission failed to fulfill its statutory obligations under NEPA and did not follow the Biden-Harris Administration’s commitment to a science-based approach to protecting the atmosphere, the Earth’s climate, space, the well-being of U.S. citizens, and critical research that relies upon radio and optical astronomy.”