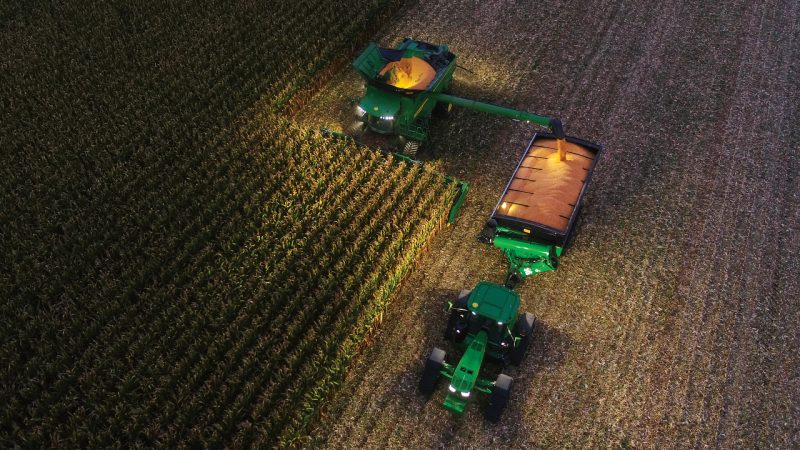 John Deere, the U.S. agricultural farming giant, is likely to deepen its relationship with the satellite sector over the next few years.

The company has a history with satellite and began to develop its StarFire Network in 1998. It was one world’s first global satellite-based augmentation system capable of real-time accuracy within a quarter of an inch. John Deere is only one of a handful of companies that has its own global satellite correction network to enable this level of precision. The system works by pairing a network of reference stations – which have a known location – with the GPS receivers in the cabs of the company’s machines. It allows John Deere tractors to drive themselves, place seeds, and develop accurate geospatial maps.

Al Savage, manager of the StarFire Network, tells Via Satellite that John Deere is one of many companies looking at the potential of Low-Earth Orbit (LEO) satellites, but he does not necessarily see LEO satellites as a game changer for a company like John Deere.

“When you look at the sharing of big data that needs to happen quickly, the LEOs could become very popular in this space, particularly in filling connection gaps in rural areas. We are on the doorstep of creating a lot of the same features for our customers today. But, I do think [LEOs] will make things more robust. I can see it advancing the game as times goes on, rather than changing the game.”

Savage says it would be a personal dream for John Deere to own and operate its own small satellites to service its operations.

“My dream, coming from the perspective of someone in the Intelligence Solutions Group of John Deere, I would love to own our own satellites. But that is just a personal opinion. I would never say never as it depends on multiple factors. John Deere has often surprised me in how we’re not afraid to take a chance. We will see what happens in the future.”

Savage believes technology can make a huge difference when it comes to more efficient farming. He points to the fact that a lot of people never expected tractors or sprayers to be semi-autonomous, and many didn’t expect machines to speak to machines and connect through the Internet of Things (IoT). Some technology in use today had previously looked impossible.

John Deere is heavily involved in the Geostationary (GEO) area, and Savage believes the company will use more satellite capacity in the future. He said the company is doing reconnaissance to continue improvement in satellite-based services.

Given overall population growth and the pressures to feed billions of people around the globe, the use of satellite technology could be more than important than ever. Savage points to the fact that because the world will have to feed a large number of people by 2050, farmers’ work needs to double or triple in production size. This is where satellite comes in. The data that is collected in day-to-day operations can be used by farmers to make more effective decisions.

“GPS allows for that efficiency and precision. One example is during the planting process: The ability to plant the seeds strategically apart from one another, pass-to-pass, year-over-year is essential. This means once you plant the seeds or roll through a 5,000-acre field, the very next year when you have to do it again. It remembers where you planted the seeds before. The same can be said about spraying and harvesting,” he says. “All this comes into play from GPS. In order to be able to double the amount of production, it’s best to try to make your job easier, more efficient, and less redundant. This is where the combination of satellites and some of the sensors we have on the platforms come in.”

The Role of AI and ML

The company is taking a high-tech focus to agriculture that goes beyond using satellite technology, bringing Artificial Intelligence and Machine Learning (AI/ML) into operations. In 2017, John Deere acquired a company called Blue River Technology, which specializes in AI technology. The company is examining the propensity of over-use with nitrogen, herbicide or other elements that are sprayed. With AI and computer vision, John Deere is field testing a feature that it calls See and Spray

Savage explains this. “It involves using cameras to analyze crops as you go along and builds a library of the crops that you have. From that library, it will be able to decipher weed from crops, and then the AI involved directs the sprayer to only spray weeds. You don’t have to use as much in terms of supplies. From a redundancy perspective, you are not spraying the same spot twice.”

Satellite is currently in use with a feature called Auto-Trac, which essentially guides the equipment in a straight line between the rows of whatever crop has been planted. “The operator themselves is not limited to just driving the tractor; they’re freed up to do other tasks as well. For instance, they don’t have to worry about turn-by-turn or running over crops. GPS has really made your day-to-day in the agriculture space a lot easier to manage. You suffer less burnout, and it makes things more efficient, which brings more yield, and farmers really appreciate that,” says Savage.

John Deere was an early adopter in using tech and satellite to boost its operations, but there are a number of startups in the agriculture space looking to optimize agriculture with satellite. Savage says that with the growth of satellites in LEO, this could get more smaller companies involved with satellite for agriculture.

“Smaller companies are starting to take notice of the ease of use. If there is way to do your job more efficiently and increase yields, you would be intrigued to find out how you could do that. There are different ways in which the smaller companies can get involved with satellite, where it is not too expensive. Because of where LEO is going, they may have the chance to get into that game,” says Savage.