Fundraising Big Focus for LeoSat in 2018

NewSpace startup LeoSat, which is building the satellite equivalent of a Virtual Private Network (VPN) in space, plans to focus primarily on raising funds for its Series A round this year. With a glut of major customer agreements already signed, the company’s next hurdle is ensuring it has enough cash on hand to build out its full constellation by 2022, said LeoSat Chief Executive Officer (CEO) Mark Rigolle in an interview with Via Satellite.

“You can’t sell to customers unless you’re building something, and you can’t build something without money. But you can’t get money without customers. So it’s like a dog chasing its tail,” Rigolle joked. “You need to advance on the sales front, technical front and funding front at the same time. It’s a three-legged stool.”

According to Rigolle, discussions with customers have progressed swimmingly — thus far, the company has secured more than $700 million in future commitments, and plans to announce “probably five or six” more agreements in the coming weeks and months. 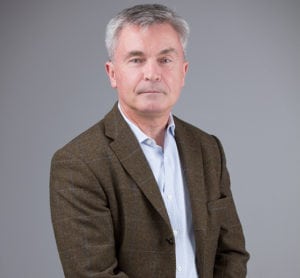 Because LeoSat’s offering is not broadband capacity per se, the company is positioning its services adjacent to fiber, but at a premium. Its most promising customers are large international corporations that run highly sensitive information across long distances. Rigolle highlighted pharmaceutical companies as one example: “They have multiple research centers where people do distance collaboration. Now, they do that over a patchwork of terrestrial systems that run through internet exchanges, where someone could physically intercept that signal,” he said. “For them, intellectual property is everything. If you steal a molecule, that can kill a pharmaceutical company.”

The crux of LeoSat’s security advantage is its intersatellite laser links, which allow the company to transfer data globally while bypassing vulnerable terrestrial gateways. On the technical front, LeoSat has worked with engineers from Sky Perfect JSAT, which invested in the company last year, to finalize the constellation’s design. According to Rigolle, the two companies have together derisked the technology around the “satellite links and the onboard processors,” which allowed LeoSat to debut its Series A with the goal of raising $100 million.

LeoSat also recently signed an agreement with Phasor to develop a Ka-band version of its low-profile Electronically Steered Antenna (ESA). While a traditional mechanized dish will be sufficient for the majority of the company’s services, ESAs could unlock new applications and customer bases, Rigolle said, pointing to embassy networks as an example. “The U.S. embassy in London or Paris is never going to get planning permission — or they don’t have the room — to put a mechanized dish solution for high throughput. Being able to have a flat panel on the roof makes a lot of things possible,” he said.

So with the core technology and initial customers in place, what LeoSat needs to do now is prepare for the manufacturing phase. “For that, we need the third leg of the stool, which is the money,” Rigolle said. LeoSat intends to close its Series A by the second quarter of this year, after which it will immediately kick off its Series B round to raise an additional $175 million. The total cost to build the full constellation will be around $3.6 billion.

“The question is, who is going to be amongst the large industrial strategic shareholders,” Rigolle said. Of the total raised funds, the percentage invested by “strategics” will be quite high for LeoSat’s Series A, somewhere around 80 percent. That percentage will decline over time, “to the point that in our Series C or D I see infrastructure funds coming in,” Rigolle said.

A few years ago, these infrastructure investors would have never touched something that’s pre-revenue, Rigolle said. Now, though, they are beginning to lax their criteria as they try to find more productive investments. “These are people who invest in airports, ports, tunnels and bridges. They’re looking at satellites as well,” Rigolle said.

Rigolle added that while the company has not yet chosen a launch provider, the determining factor will be the ability to do multiple burns per stage. “We’ll be trying to have diversity of launch vehicles” to mitigate the risk, Rigolle said, which means SpaceX’s Falcon 9, Russia’s Soyuz, International Launch Services’ Proton, and Arianespace’s upcoming Ariane 6 are all potential candidates.