Business Continuity: Maintaining Communications After a Disaster – From our Archive

As Puerto Rico grapples with the aftermath of Hurricane Maria’s widespread destruction, network managers in the country are working around the clock to restore critical communications avenues. In this article from 2006, we explore how businesses can leverage satellite technology to stay connected and quickly recover their networks in the wake of a large-scale disaster. This article was originally published in the September 2006 issue of Via Satellite. 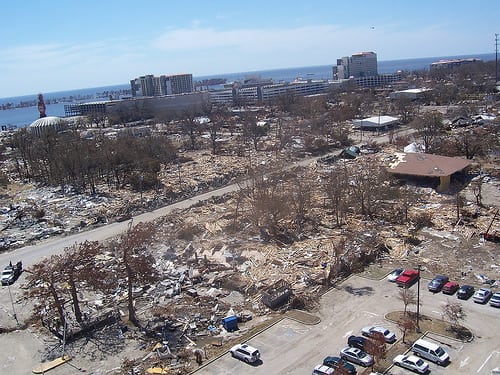 An increasing number of organizations are discovering that the only way to guarantee their communication systems stay online during times of crisis is to employ satellite backup systems to their terrestrial networks, which can be knocked out by any number of natural or man-made events.

For IT/Network managers, such threats are all too real. Experiencing a network loss can be detrimental to a corporation that is trying to rebuild after a natural or man-made disaster. In fact, a recent survey of small businesses located in the U.S. Gulf Coast region found that 37 percent lost broadband service in the aftermath of Hurricane Katrina. The loss of terrestrial connectivity led to network downtime, loss of orders and the inability to conduct transactions online, resulting in losses of more than $25,000 for about one-quarter of those companies, the survey said. While predictions for the number of storms expected to form during the 2006 hurricane season in the United States have been lowered, the National Hurricane Center still forecasts 12 to 15 named storms by the end of the season Nov. 30, with up to four reaching major
hurricane strength.

Fortunately, as fulltime communications availability supporting Internet access, voice communications and virtual private networks (VPN) become more crucial to businesses, integrating satellite capabilities into a network, either as a primary provider or backup system, is becoming easier for network managers working in companies of all sizes. More options are becoming available for organizations from small, regional companies to global behemoths, with solutions being offered by small, independent firms on an emergency contingency and by large network providers as part of their basic networking services.

Agility Recovery Solutions has been providing communications backup solutions for customers since the early 1990s, says David Steele, Agility’s director of network products. “We’ve been in the disaster recovery business for 17 years and have a large inventory of computer equipment, desktops, servers and telephone handsets,” he says. “We bring all the equipment to the equation and also bring the facility. We have a large number of mobile units that can we roll out from various locations from across North America.”

Agility established a partnership with a satellite service provider in 1999 that allowed Agility to expand its backup communications offerings to full-service recovery, Steele says. “We were challenged by our customers to come up with a fuller solution,” he says. “We investigated the marketplace and found that satellite was the way to go. … Agility is in the business of disaster recovery, and with [satellite] systems, we have a product where we can provide full network connectivity without any terrestrial requirements,” Steele says. “Where hurricane or flood or power outage has affected an area, we can establish a complete solution via satellite to get communications up and running within a specific timeframe under the recovery contract. We have found that you cannot rely on anything terrestrial for guaranteed connectivity.”

In the aftermath of a disaster, Agility brings in the hardware, and the satellite provider contributes earth stations and space segment, Steele says. “They also act as our teleport where we bring down all the services and also provide a lot of engineering expertise. … We have the skill set to work in the field, and we have earth stations that are easy to set up. After we get the satellite lock, [the satellite provider] does the last bit of configuration, and they don’t have to be on site.”

Agility provided satellite communications backup services in the aftermath of Hurricane Katrina and other disasters, he says. In August 2004, Agility provided a complete portable communications facility with satellite connectivity that supported 50 phone lines and 1.5 megabits of Internet connectivity for various clients. “We’ve done a number of medium -sized recoveries, particularly during Katrina and Wilma last year,” he says. “That really gave us a good exercise to use our capabilities when had multiple customers recovering at the same time on our network.”

Agility’s backup solution can be tailored to meet the specific requirements of the customer, Steele says. The company’s standard 48-seat mobile unit, dubbed Readysuite, costs $250 per month, while the largest unit, the Readysuite 192, can be used for $2,500 per month. Agility has mobile solutions stored in locations across North America — 72 sites in the continental United States and another 14 in Canada — that can be delivered within 48 hours.

“We have customers that want a very basic service,” Steele says. “They want some sort of Internet connectivity and they will do the rest. But most need some sort of call center handling the connection back to the facility. We work in conjunction with the [satellite provider] to engineer the VPN that mimics what the company has normally. … The smallest solution is as small as the customer wants. If they have a business critical foundation that needs a single mobile unit, we have one that can house up to 18 people. We also have solutions for enterprise-class clients to provide up to 500 seats in a single recovery location.”

Some large communications providers have gone the route of offering their own backup systems already integrated into their full-service network operations. Telefonica International Wholesale Services, part of Spain’s Telefonica Group, provides a portfolio of wholesale services that includes voice, Internet Protocol (IP), data and capacity services to more than 100 million customers around the globe, says Eduardo Gonzalez Garcia, a project manager for Telefonica. “We are dedicated to selling carrier services to all the big companies and their carriers,” he says. “We sell international voice services, IP services, Internet, virtual private networks, and included in that is satellite services. We are mainly focused on VPN services for enterprises and Internet access that completes the terrestrial coverage where this is no terrestrial service. For example, we are providing services from New York to various countries in Latin America and from Spain to various countries in Europe and Africa.”

Telefonica been providing satellite services 1992, an offering which is continually evolving, and the company offers backup satellite solutions in conjunction with a pair of companies that provide satellite networks, says Garcia. The satellite technology is used to extend its normal network offerings in areas of the world that do not have terrestrial infrastructure, such as in Mexico, Panama and El Salvador, where the space segment extends Telefonica’s terrestrial cellular coverage.

The satellite capacity also is used to provide backup VPN services. “That is included in what we do,” Garcia says. “our customers explain to us what is needed and we try to adjust our solution for them using VSAT services or mesh services or whatever they need. We find the technology and adjust to that need using satellite.”

The only minor issue for some customers is the inherent network delay that comes with using satellite, but technology advances have helped Telefonica reduce the impact of the issue, says Garcia. “It depends on the kind of applications they are using. In some cases, they have complaints regarding delays,” he says. “Some applications like SAP or some remote control applications need very fast replies to send messages and using satellite, we have a minimum delay that cannot be solved. But it’s not a problem that would break a deal, because in some cases, we can improve the performance of the network. Even if it the speed is not as good as they want originally, we can help them improve and fine tune their own applications to help with the delay.”

While establishing a satellite backup network in the aftermath of a disaster is easy, network managers should, however, be prepared in advance for such a possibility. “We don’t take clients after the disaster,” Steele says. “They have to be subscribed to the services before the event. We have obligations to clients to make sure we handle their needs appropriately and to have the scale and size to handle their needs in an acceptable timeframe. We don’t take customers off the street.”

Agility also has upgraded its satellite offerings throughout the past several years, says Steele. “We started off with a [single channel per carrier] model that provided a fixed-bandwidth single channel per client,” he says. “We would bring up new bandwidth for each customer, which is a good model for our enterprise clients. But in the last two years we have been brought into the [time division multiple access] space. It’s a cost-effective solution for small- and medium-class market.”