Microsoft Looks to Close Rural Broadband Gap in the US 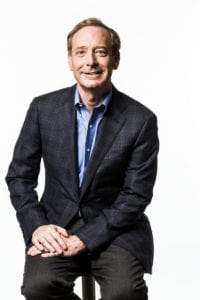 Microsoft wants to close the United States’ broadband gap by 2022, and intends to leverage unused TV spectrum as a core part of its strategy to bring internet to rural neighborhoods. The company also laid out a plan that will combine investments in private companies with support from public organizations to expand coverage to the 34 million Americans who lack access to broadband internet.

According to a statement released by Brad Smith, Microsoft’s president and chief legal officer, the strategy builds on Microsoft’s efforts over the past decade to develop software-defined radio technology that can more efficiently use limited spectrum resources. The Federal Communications Commission (FCC) adopted rules enabling the use of unused TV spectrum, known as “TV white spaces,” back in 2010. Now that technology such as Very High Frequency (VHF) communications has evolved further, “the market is poised to accelerate,” Smith said.

Microsoft believes that the most cost-efficient approach to closing the broadband gap is implementing a combination of technologies. In fact, citing a study conducted by The Boston Consulting Group, Microsoft stated that coalescing TV white spaces, fixed wireless and satellite coverage can reduce capital and operating costs by 80 percent compared to just fiber alone, and approximately 50 percent compared to fixed wireless.

Microsoft sees TV white spaces as the most efficient method to reach the majority of the rural population that is currently underserved, while satellite’s wide coverage is more appropriate for even less dense regions. Fixed wireless would then be a better solution for dense peri-urban areas. According to Microsoft, this mixed model can bring the total cost of closing the broadband gap in the U.S. to somewhere between $8 and $12 billion.

Over the next year, Microsoft will roll out its Rural Airband Initiative to help stimulate adoption of this model in the private sector. It plans to invest in U.S. telecommunications companies to fund the expansion of broadband coverage, and will use the return on those investments to fund additional projects and expand coverage further. “We and our partners will have at least 12 projects up and running in 12 states in the next 12 months,” Smith said. 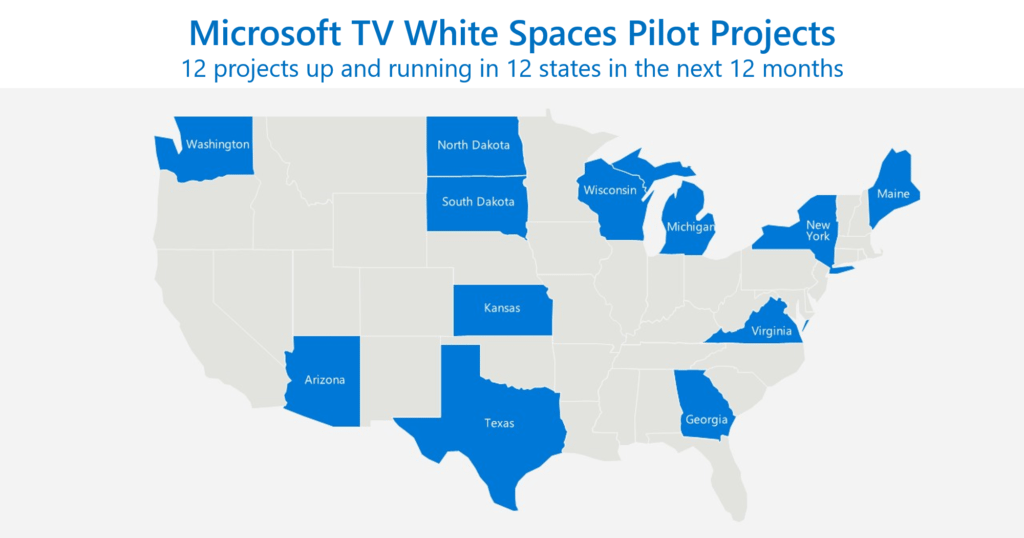 Microsoft will target 12 states over the next 12 months with its TV white spaces program. Photo: Microsoft.

In Phase 2 of the initiative, Microsoft plans to train civilians in newly connected communities “so they can use this new connectivity to improve education, health care and agriculture, as well as transform their businesses,” the company stated.

Lastly, it hopes to stimulate investment from other companies by offering royalty-free access to nearly 40 of its own patents and sample source codes related to broadband connectivity. “Our goal is to serve as a catalyst for market investments by others in order to reach additional rural communities,” Smith said.

On the government side, Microsoft has called for the FCC to keep at least three unlicensed channels below 700 MHz available for wireless use, as well as accelerate its data collection on the state of broadband coverage in rural regions. The company is also urging federal and state organizations to include capital investments for broadband coverage in their infrastructure budgets. It specified too that that these funds should not be limited to just one technology, and should instead be targeted at whichever technology is most cost-efficient for the area.

If all goes according to plan, Microsoft expects expansion of broadband coverage to offer a range of benefits for rural communities, including lower barriers to entry for small businesses, improved healthcare via telemedicine,  and additional opportunities for education. Citing a 2015 study, Microsoft also pointed out that better access to broadband is strongly correlated with higher incomes and lower unemployment rates. Perhaps its most convincing argument, however, is an Ericsson study that found doubling broadband speeds could increase U.S. Gross Domestic Product (GDP) by $126 billion.