Gulfstream Exec on New Forms of Connectivity for the Private Jet

Although business jets and passenger planes don’t seem all that different on the surface, each vertical has its own distinct challenges and customer demands. As director of flight capabilities innovation/advanced flight deck at Gulfstream Aerospace, Bethany Davis often thinks about the best ways to implement new satellite-based bandwidth and capacity to serve the company’s high-profile customers. Via Satellite spoke with Davis to hear some of her thoughts ahead of her panel, “The Business of Connecting the Private Jet,” at the Global Connected Aircraft Summit 2017 on June 7.

VIA SATELLITE: How do the connectivity needs of business jets differ from those of passenger planes?

Davis: I would say the biggest difference is in the customer base. Our customers have a very critical need to stay connected. Our customers are Fortune 500, heads of state, government [officials]… But when you get to the airframe itself, the difference is our aircraft are not wide-body. And the flight routes: our aircraft are not going your typical New York to London [route] … We have from a home office headquarters in the Midwest to New Zealand, for example. We have very personalized and unique flight routes.

VIA SATELLITE: How are you currently meeting your customers’ specific connectivity demands? 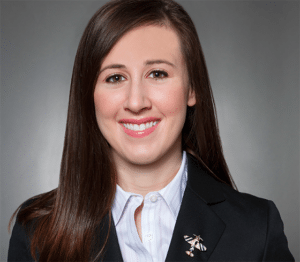 VIA SATELLITE: What are the challenges unique to the business jet vertical?

Davis: The biggest challenge is the fact that our customers, being unique, have high expectations. Everything is driven by the consumer market, so they’re used to being connected in their home or in their office or even just using cellular data wherever they are when they’re on the ground. People have those same expectations for an aircraft that’s flying at Flight Level (FL) 470 and Mach 0.90.

It’s trying to bring that level of consumer market ground-based communications ability to the flight route of the Gulfstream aircraft and at the speed and altitude.

VIA SATELLITE: Do you feel Gulfstream is able to meet customer demand, or are they asking for more than you are able to give right now?

Davis: We announced the JetConneX Ka-band offering last year, and that is now available in the marketplace for our large-cabin aircraft. Customers are very happy with the performance of that.

What is [demand] going to be in three or five years? I’ll just say generically we are looking at new satellite communications, new ATG systems, as well as new TV systems. Across the board, from satellite to ATG to TV, we are actively looking at the technologies that are on the horizon.

VIA SATELLITE: Could you describe your business model? How willing are your customers to invest in these new connectivity applications?

Davis: All of our connectivity options are options, so it’s not standard on the aircraft. I would say there is a willingness to pay from the Gulfstream customers because they know we have a very rigorous and robust design and testing plan and what we call our In-Service Evaluation (ISE). We have to make sure, for example, that in the middle of July in Qatar, if an aircraft is sitting on the tarmac for four hours waiting for passengers to arrive, that the Wi-Fi system won’t overheat. Again, at FL 470, that same flight system needs to be able to operate at minus 70 degrees Celsius. So we’ve spent a lot of time in the design and test phase to make sure that whatever system is on the aircraft will work regardless of where the customer is located.

Another item is look angles and blockages. When you have a bunch of antennas up in the tail, they can start blocking each other out, so we work very hard to design the installation of the antenna so that it is not blocked no matter if you’re on a northerly heading or a southerly heading, going to the satellite or away from the satellite.

We spend a lot of time making sure that before it gets into customer hands that it’s going to be something they’re happy with. That’s where the willingness to pay comes from.

For example, going back to JetConneX, we spent August 2016 through May 2017 doing the ISE, where we put this system on select customers’ aircraft. They’re essentially beta testing it for us and making sure that they are happy with the performance. They give us the feedback that this is ready for primetime so that by the time we roll it out, we have all the parts in place, we know that the system’s going to work, and we know that customers are going to be really happy with it.

VIA SATELLITE: What are some of the ways Gulfstream uses connectivity to improve operations?

Davis: Gulfstream is actively looking at how to connect the flight deck while also bearing in mind that cybersecurity is extremely important. Nobody has figured out the connected aircraft yet. For the past 10 or 15 years we have had something called Plane Connect that uses the basic Aircraft Communications addressing and Reporting System (ACARS) network, where at the top of descent or whenever the crew decides, [the plane] can send a message down to either their maintenance facility or Gulfstream and their maintenance facility that would show squawks on the aircraft. So if you had a certain failures, it would notify people on the ground.

There are a lot of people that have been talking about the connected aircraft for decades and nobody’s really figured out the use cases. And nobody’s figured it out in the context of cybersecurity. Right now, the only way to get information into the airplane is by the pilot typing it directly into the avionics.

VIA SATELLITE: What are your thoughts leveraging ATG networks to provide connectivity versus satellite?

Davis: Right now, the only ATG system that we have is the Gogo system, which is based in the continental U.S. and parts of Alaska and Canada. By definition, if you’re a European-based customer or based out of Asia-Pacific, that may not be the right answer for you. But for a North American-based customer, who 50 percent or more of their flights are in the United States, then that can be a really good option. Also, typically, the pricing on ATG is lower than satellite. From an install perspective and for a monthly subscription, ATG has historically been much cheaper than satellite. So I would say it depends on the customer.

With the 4G ATG options that are coming to the market, those speeds are getting close to what we have now with the JetConneX Ka-band in the approximately 6 to 10 Mpbs range. The historic Gogo 3G network was a maximum of 3 Mbps approximately. I think for the immediate time, satellite is faster — but in the next 18 months these 4G ATG systems are going to be as competitive on speed, and again, at a lower price point.