This Company Plans to Turn Airplanes into Communications Satellites 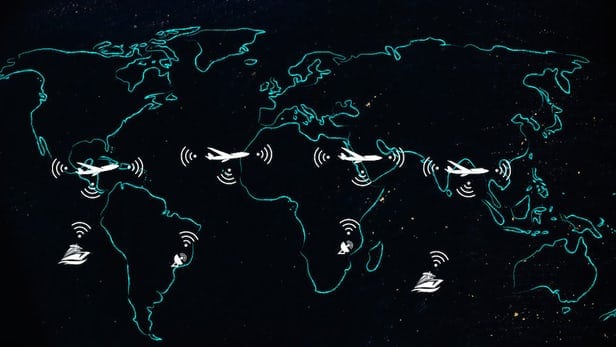 A Simi Valley, California, company believes commercial airplanes could become the communications satellites that the telecommunications industry has been craving. Backed by leadership that has achieved aviation industry firsts in the past, Airborne Wireless Network (AWN) is preparing for a test in late March that it hopes will serve as a proof of concept for a new airborne broadband infrastructure

In August 2016, AWN officially trademarked the “Infinitus Super Highway,” which serves as the blueprint for its goal of creating a high-speed broadband airborne wireless network by linking commercial aircraft in flight. Essentially, AWN wants to place its broadband transceivers on a critical mass of airborne aircraft and use equipped aircraft as signal repeaters capable of providing wireless signals all over the world. This is similar to the way communications satellites provide connectivity to ground-based users while orbiting Earth. However, AWN sees its use of commercial aircraft as providing higher bandwidth, better data communications performance and a lower operational cost than traditional communications satellites can.

AWN’s patent describes the network as establishing hub cities and serving telecommunications needs by using fleets of commercial aircraft to act as a “constellation of low-flying communications satellites that linkup the wireless signals.” Further, acknowledging that these aircraft would be constantly moving toward their destination airports, AWN proposes supplementing the signals generated by the aircraft with a ground-based fiber optics infrastructure. Additionally, the aircraft could also assist and address the mobility challenge of their potential signal generation by acting as signal repeaters, handing off one user’s connection to the next aircraft flying within range. Signal range for AWN’s broadband transceiver is up to 240 miles, according to the company.

“We’re the pipeline,” said Jason de Mos, vice president of business development and compliance for AWN. “We’re not providing service to end users, we’re connecting aircraft and whoever taps into that connection and take advantage of the network, whether that’s an In-flight Entertainment (IFE) company [or] a telecommunications company.”

AWN isn’t the first company to think of this concept, as its website notes. The original inventor of the “airborne worldwide web” concept first submitted a patent on its behalf in September 2001, though the concept was never pursued.

To make this concept work, AWN describes two essential pieces of equipment: a ground base station unit, and mobile units deployed onboard aircraft. The ground base stations AWN uses feature transmitter, receiver and high-gain tracking/directional antennas equipment and would need to be deployed at high altitudes to establish its own line of sight coverage range. Antennas would be controlled by flight information such as Global Position System (GPS) data and would be capable of receiving a wireless signal from one aircraft and transmitting that signal to a different aircraft.

“The more aircraft that carry the system, the more robust it becomes,” said de Mos, who describes the AWN concept as the “first of its kind civilian air-to-air broadband communications system.”

AWN further describes its network as an airborne web with nodes connected via multiple links, as opposed to traditional single link cell tower and satellite networks. The company sees its network servicing the needs of IFE providers, ships, telecommunications companies, I(ISPs), and airlines. Furthermore, the company does not see existing In-Flight Connectivity (IFC) providers as competition, but rather as potential partners or even customers.

“We’re providing a broader pipe to airplane, so whoever provides the in-flight entertainment services, we can definitely accommodate them,” said de Mos. “We’re not there to compete with them, we just have a faster method of getting data to the aircraft.”

Since acquiring the patent for the concept in August, AWN has received a project number from the U.S. Federal Aviation Administration (FAA) for a Supplemental Type Certificate (STC) to install its broadband transceiver system on Boeing 757-200 aircraft. In December, AWN announced an agreement with Electric Lightwave Holdings, a regional fiber-based network services provider with a fiber optic network capable of speeds of up to 200 Gbps. Based in Vancouver, Washington, Electric Lightwave’s 12,500-mile fiber optics cable and data center network is regionally operated throughout the western U.S. and also features an undersea cable link to the Hawaiian Islands. AWN sees the agreement with Electric Lightwave as providing its initial link to the ground segment that is needed to support the future concept.

Moving forward, the company is preparing for a flight test at the end of March that will pair two Boeing 757s with a mobile ground station that will provide an initial proof of concept test. The next test after that is scheduled for 2018, when AWN wants to test the concept using 20 AWN-equipped aircraft. One way the company has already addressed the need for aircraft equipage is through a partnership with Air Lease Corp., which currently has a fleet of more than 277 Airbus, Boeing and Embraer aircraft in service with 88 airline customers across 52 countries. Some airlines could even use the new network as an additional revenue source, according to de Mos.

AWN’s network will require a critical mass of equipped aircraft in order to be realized, and the company’s goal is to equip the entire global fleet of in-service aircraft, currently estimated at more than 27,000, with its equipment. However de Mos said the initial goal is to equip enough aircraft flying in the U.S. to provide reliable network coverage for the U.S. before moving on to the rest of the world. Considering the company’s leadership team features Marius de Mos, who was part of the team that developed the first FAA-approved airborne in-cabin wireless commercial telephone system, AWN said it believes it is rightly positioned to bring the concept into reality in the near future.

This article was first published on our sister publication Avionics Magazine.