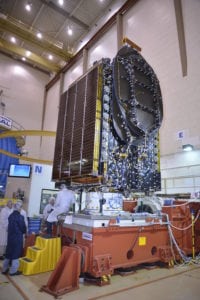 [Via Satellite 11-08-2016] Asia Satellite Telecommunications (AsiaSat) has been granted a patent from the United States Patent and Trademark Office for methods and systems that enable effective aviation communication via satellite over a broad area at high altitude. The patent is entitled Methods and Systems for Providing High-speed Connectivity to Aircraft.

Example methods include the use of a wide-beam antenna on a satellite to provide a wide coverage by transmitting signals at a frequency higher than 10 GHz and at a relatively low satellite power to avoid interference with ground stations or adjacent satellites. At the same time, the satellite system is configured with a spot-beam antenna to receive signals from a mobile antenna on the aircraft at a different frequency of at least 13.75 GHz to achieve better gains for higher data throughput rate of the connection, according to the patent.

With the use of a low-power wide-beam antenna, the described system enables communication coverage for aircraft with fewer beams, fewer antennas and receivers onboard a satellite, thus reducing its payload, hardware and ground-stations requirements. The aim is to provide a more reliable service with less switching and traffic handover issues. The same method and system can also provide connectivity to an Unmanned Aerial Vehicle (UAV) for establishing immediate communication links in emergency situations due to a natural disaster or warfare.