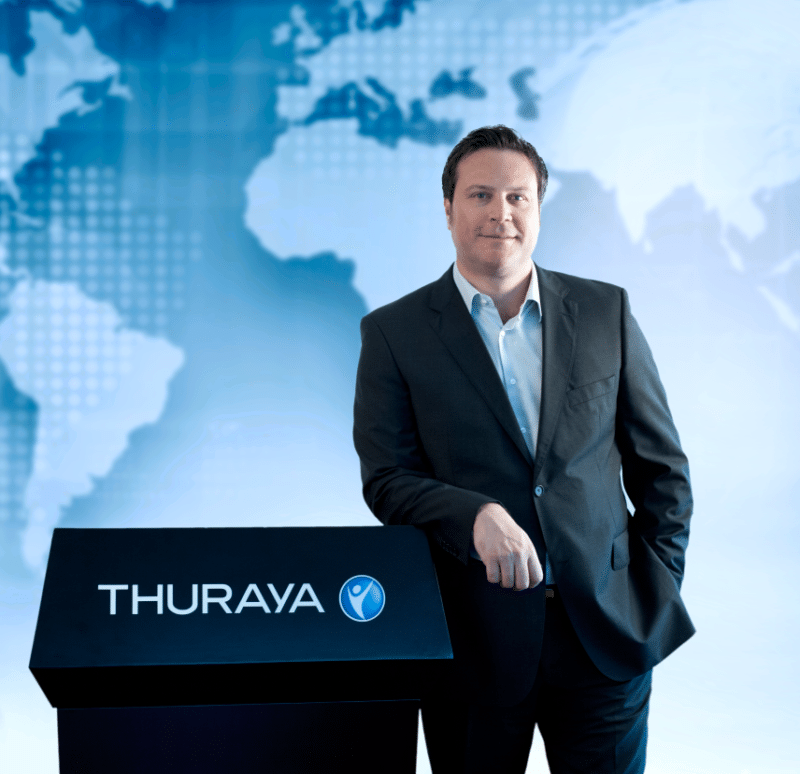 [Via Satellite 10-28-2016] Thuraya hopes its recently announced Futura constellation will not only cement the operator as a leader in mobility markets, but also extend its reach to have global coverage. Today Thuraya has two satellites that give L-band coverage of the Europe, Middle East and Africa (EMEA) region as well as the Asia Pacific. Samer Halawi, CEO of Thuraya, told Via Satellite that the operator has been constrained by incomplete coverage of the world, and aims to change that with Futura.

“At Thuraya we have a bunch of energetic young people with a lot of hunger, and yet we’ve operated over the last few years within a lot of limitations. Regional coverage is a big limitation, and some of the legacy issues the company faced were quite limiting, but with Futura we are going to get rid of those limitations,” he said.

Thuraya has been preparing for a next generation constellation for the past few years, and has set a launch date of 2020 for the refresh. Halawi said the operator sought numerous expert opinions, hiring Toffler Associates to integrate future trends, and A.T. Kearney management consulting to develop a “bulletproof business plan.” Halawi describes Futura as a multi-dimensional expansion and diversification plan that builds on the company’s strengths, such as its heritage in the GSM world.

Thuraya is going to go into fundraising now for what Halawi said would be a system of two, possibly three new satellites, and a ground segment that touches every continent. The future satellites are to have significantly expanded, higher quality L-band coverage enabling the company to tap into new levels of the maritime market and also make a foray into aeronautical connectivity. Halawi said the expansion strategy is split into two phases in order to achieve global coverage.

“The first phase of that is going to expand our coverage over where it is today without looking at the landmass of the America, but getting more of the maritime and aeronautical key routes over the oceans,” he explained. “Phase two is going to involve looking at the landmasses of the Americas. That is something we are likely to do through partnership. We are engaged in such discussions at the moment.”

Halawi said that with Futura, Thuraya should be able to win a larger chunk of the cumulative L-band market, which he estimates is worth roughly $56 billion from 2020 to 2035. Maritime in particular will be an important growth vertical; Thuraya started in maritime three to four years ago, and last year grew 15 percent year-over-year, engaging sectors like the fishing communities in China, Indonesia, the Philippines and elsewhere, but particularly in Asia. The company anticipates Futura’s increased reach over oceans will mean it will engage more customers that were inaccessible before.

“Global merchant shipping is something we haven’t targeted at all, because they need coverage that we don’t have today,” Halawi shared.

For aviation, Halawi said Thuraya has a product currently under development. Aeronautical connectivity will not be as big of a focus as maritime, he said, but will constitute new business. Rather than go for large In-Flight Connectivity (IFC) contracts, he said Thuraya’s focus will be on smaller, more targeted opportunities.

“There are a lot of smaller regional airlines that require connectivity. Government is a very important sector for us and the government aero business is going to be an area of growth, whether that is drones or government airplanes. That is something we will go after as well,” he said.

With Futura, Thuraya plans to have L-band, GSM, Internet of Things (IoT) and High Throughput Satellite (HTS) capabilities all from the same fleet. The new generation L-band will focus on mobility services in core and new markets, complemented by HTS for bandwidth-hungry applications in land, maritime and aviation. Halawi estimates that only around 50 percent of Thuraya’s future revenues will come from L-band, with the rest coming from newfound HTS and IoT business. Thuraya is already involved in the IoT space today, having released a product with ViaSat this year and having supported a major mountaineering expedition with WiCis Sports.

“We are looking at telemedicine, e-learning, satellite radio, M2M, utilities, asset tracking and wearables — there are 10 different applications that we have identified, and we are not going to wait until 2020 to start. We are already pursuing some of these today, and we will increasingly do so. We are in the middle of talking to platform providers to acquire the right platforms that will allow us to expand,” said Halawi.

Thuraya’s HTS services are likely to be in Ka- or Ku-band, Halawi said, though the operator has not yet made a decision. He said the company is in discussions with operators that offer either or both in order to strike up a partnership.

“On the HTS side, this is a market where the expectation is a lot more supply will be coming in than demand,” said Halawi. “We felt the right position for us, in which we will do better, is to become a wholesaler of HTS capacity rather than being a network operator. So we have started engaging with several operators to establish the right partnership that can take us to a position in the future where we can add HTS to our product portfolio.”
Lastly, Thuraya wants to continue to build upon its business with cellular operators. Futura is to be fully compatible with GSM and allow for two-way roaming and single SIM phones. Halawi said Thuraya has 380 roaming agreements with Mobile Network Operators (MNOs) around the world, and will continue to pursue customers at the convergence point between GSM and satellite.

Halawi said Futura will also prompt an increase in headcount at Thuraya. Along with increasing the company’s physical locations, he said more people will be required to make the company’s vision happen.

“Our thought process was to create a project that is completely unique. That was very important for us. We want to make sure we are delivering this project through a management team that has the experience and credibility to perform in this industry, because at the end of the day it doesn’t matter how good your concept is if you don’t have the right people to deliver it,” he said.