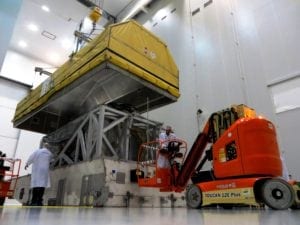 [Via Satellite 07-29-2016] Intelsat anticipates more of its future widebeam satellites will take a more “hybrid” approach, mixing some features typically associated with High Throughput Satellites (HTS) as the operator grows its fleet. Speaking July 27 on the company’s second quarter 2016 earnings call, Intelsat CEO Steve Spengler said that Intelsat 39, the latest satellite the company has ordered, will have some features that are more akin to HTS though not being part of the Intelsat EpicNG fleet.

“It is more of a hybrid design,” said Spengler, speaking of Intelsat 39. “It’s not an EpicNG satellite, but it has a more hybrid approach than a traditional widebeam satellite.

Spengler said widebeam satellites will continue to provide services for media customers, citing Intelsat 31 and the forthcoming Intelsat 36 as examples, but mentioned future satellite designs would incorporate a mix of traditional and nontraditional features.

“We will have, from time to time, replacement satellites that are not EpicNG, that are let’s call it more traditional, but will be more hybrid in design,” he explained, using Intelsat 39 as an example. “There are very specific beam designs that are optimized for particular markets or applications that are very high power. They may have spot beams, they may have steerable beams, and so it’s not going to look like a traditional widebeam satellite, but will have [similar] characteristics.”

He said widebeam has strong capabilities for media distribution, Direct-to-Home (DTH) broadcasts and for filling in certain geographic areas. Widebeam capacity, he said, would be integrated with spot-beam capacity into services like the IntelsatOne Flex managed mobility service. Spengler pointed to EpicNG as providing differentiated services that will help the operator stand out from competition, which he said is more intense among widebeam offerings from other satellite operators.

Intelsat has praised its first HTS satellite as performing better than anticipated since entering service. Since April 27, the operator has signed 20 additional Intelsat EpicNG customer agreements, with the average contract length on growth services ranging from five to six years. Of customers switching from legacy satellites to EpicNG, Spengler said only one has not contracted more capacity in the process. Going forward Intelsat expects to offer lower prices with EpicNG to attract even more customers.

“We’ve said in the past that we’ve always expected that pricing would come down on a per megabit basis with Intelsat EpicNG. That was part of the thesis and what we believe is important to unlock new sources of demand. That price decline may be a little bit faster than we anticipated in our business plan, but the volume is a little bit higher, so we are well within our expectations in terms of our business plan and business case for EpicNG,” he said.

“Our decision to optimize on efficiency for end users — not solely on total throughput on the satellite — gives us a platform that can leverage higher order modulation technology. Put simply, this means that our throughput, and that of our customers, will continue to improve as new ground hardware is developed: a clear benefit of our open network architecture. For instance, recent testing on a future modem design showed a five-times efficiency factor. As compared to Intelsat EpicNG today, this would result in a customer’s cost per bit improving without lowering the cost per megahertz,” he said.

One example of this improvement is a recently completed demonstration between Gilat and Intelsat’s government business subsidiary, Intelsat General. The companies trialed Intelsat EpicNG high throughput technology using a Gilat antenna with a six by six inch flat panel array to deliver an HD television stream at a rate of 3.9 Mbps using only 15 MHz of bandwidth. According to the companies, both the forward and return links carried data streams three to four times greater than previously possible with traditional wide beam satellites. Spengler said the demo showed how flat panel arrays could be used for Remotely Piloted Aircraft (RPAs).

In terms of the specifics of the financial report, Intelsat generated $542 million in total revenue for the three months ended June 30, Earnings Before net Interest, Taxes, Depreciation and Amortization (EBITDA) of $403.6 million and Adjusted EBITDA of $410.7 million. Total revenue decreased by 9 percent decline as compared to revenue of $598 million in the second quarter of 2015.