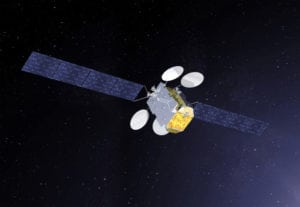 Artist rendition of the Broadband for Africa satellite, which is planned to launch in 2019. Photo: Thales Alenia Space

[Via Satellite 06-21-2016] Eutelsat Communications and InfraMed have entered into an agreement whereby InfraMed becomes a c.21 percent shareholder in Broadband for Africa, the venture set up by Eutelsat to provide satellite broadband services on the African continent. By investing in Broadband for Africa, InfraMed is pursuing its strategy to focus on opportunities in regions characterized by dynamic demographics and infrastructure insufficiency.

Set up by Eutelsat in 2015, Broadband for Africa aims to deploy affordable, high-quality broadband connectivity in Africa using, in the first phase, leased Ka-band capacity on Spacecom’s Amos 6 satellite, and in the second phase, resources on its own dedicated High Throughput Satellite (HTS) that will be launched in 2019. Broadband for Africa will develop direct-to-user consumer and enterprise broadband services and address the market for community networks connected to Wi-Fi hotspots, mobile phone backhauling and rural connectivity.