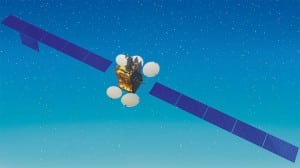 Artist rendition of the Express AMU1, the new Russian heavy telecoms satellite, which has been successfully translated from the geo-transfer to the geo-stationary orbit. The spacecraft solar panels have now been fully deployed. Photo: RSCC

[Via Satellite 01-04-201] Following the deployment of all onboard antennas, the Russian Satellite Communications Company’s (RSCC) Express AMU1 satellite was oriented toward the Earth on Jan. 1. A team of specialists from the spacecraft manufacturer entity and RSCC are currently proceeding with in-orbit tests of the AMU1 space platform, whereupon payload tests will commence.

RSCC plans to commission the Express AMU1 satellite in February, after completing flight-and-structural tests and settling the spacecraft at the 36 degrees east slot. The satellite launched Dec. 25, 2015 from the Baikonur Cosmodrome on board a Proton-M/Breeze-M launch vehicle.

Express AMU1 is outfitted with Ku- and Ka-band transponders and is intended to support the development of TV and radio broadcasting services, including Direct Broadcast Satellite (DBS) and broadband data, in the European part of the Russian Federation and in sub-Saharan Africa. The Express AMU1 satellite will have a 15-year service life expectancy.

The Express-AMU1 satellite was manufactured on orders of RSCC under the Federal Space Program of the Russian Federation for 2006 – 2015. The building of the satellite was funded using extra-budgetary sources based on credits from Gazprombank JSC.