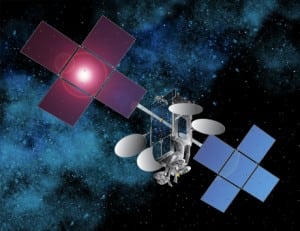 EchoStar 19, scheduled to launch in 2016, will be similar to that of the EchoStar 17 (above). Photo: EchoStar

[Via Satellite 08-08-2014] EchoStar has ramped up its spending on upcoming satellite projects. Though some have experienced delays, three new satellites and a hosted payload were described as making steady progress toward launching in 2016 during the company’s second quarter earnings call.

EchoStar produced record revenue for the quarter, reporting $880 million compared to $830 during Q2 last year. Still, the company struggled to overcome churn as broadband customers terminated subscriptions. Michael Dugan, president, director and CEO of EchoStar, admitted this was a challenge and that competition is significant, but called it unlikely that customers were dropping and switching to ViaSat, which has also been struggling with high churn. Subscriber net adds increased by 22,000, compared to more than 40,000 the same time last year.

“Getting new customers doesn’t seem to be a problem but keeping them is increasingly becoming an issue for satellite broadband providers,” Andrew Spinola, senior analyst at Wells Fargo, wrote in a research note. “Churn is a problem for both Hughes and ViaSat and raises questions about service quality and long-term demand for the service that need to be addressed, in our opinion.”

Pradman Kaul, Hughes chairman of the board of managers, as well as president and CEO, said the Jupiter satellites are approximately 60 percent full, with some beams fully or close to fully saturated. As beams continue to fill out, he said the number of subscriber additions is expected to decline. “That’s probably the single most important factor impacting gross adds over the next three or four quarters,” he said.

EchoStar is currently prepping for the addition of EchoStar 19, EchoStar 21 — previously known as TerreStar 2 — and EchoStar 23 to its satellite fleet. Solaris Mobile will use EchoStar 21’s S-band payload for Mobile Satellite Services (MSS) in Europe.  Anders Johnson, president of EchoStar said  Echostar 23 could be moved to fill the 45 degrees west orbital slot over Brazil. The company still has ambitions to develop a pay-TV service in the South American country, and for separate reasons purchased a Ka-band payload on Eutelsat’s upcoming satellite Eutelsat 65. EchoStar attempted to facilitate such a venture with Vivendi, a subsidiary of GVT, in 2013, but the project failed to materialize. The Eutelsat 65 payload is planned for broadband, and the company said the differences between such services and Direct-to-Home (DTH) broadcasts are too disparate for there to be any significant overlap.

Dugan said EchoStar 15 has been relocated to 45 degrees east in preparation for pay-TV. While EchoStar is confident on “going it alone” on the broadband side, the company still prefers to partner on DTH.

“A partnership is highly preferred because we learned that you really need a strong presence on the ground with experienced people that fully understand the market,” said Dugan. “The only caveat there is the news organization already has a good on the ground presence already in Brazil; it’s a little bit different from some other areas of the world but we are gong to continue working on partnerships.”

A concern going forward for EchoStar is the timely launch of its future satellites. One of the three, EchoStar 19, is scheduled to launch with Arianespace, but another was signed with International Launch Services. As the political turmoil between Russia and the United States continues over Ukraine, EchoStar is considering ditching Russian launches.

“One of the launches on our manifest is on an ILS Proton,” said Johnson. “Although to date no commercial launches have been impacted by the situation between the U.S., Russia, and complicated by the Ukrainian activities, but we are very closely following those developments and considering alternative launch platforms.”