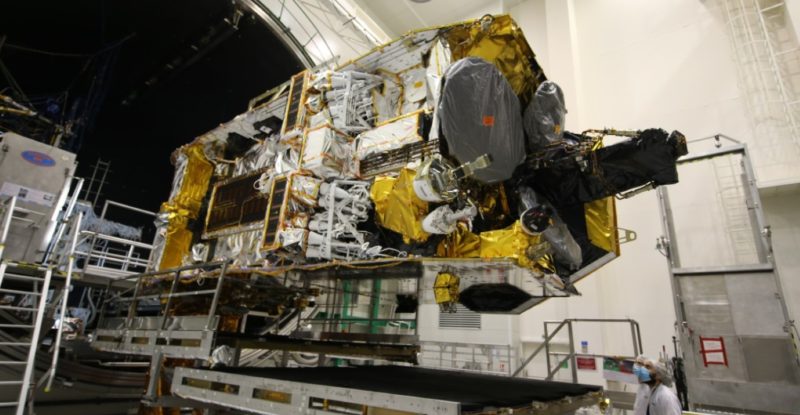 An Inmarsat-6 satellite, manufactured by Airbus.

The first Inmarsat-6 satellite built by Airbus is now on the way to Tanegashima in Japan ready for launch, the manufacturer confirmed Nov. 22.

The first satellite of the Inmarsat-6 series is due to be launched on an H-IIA launch vehicle built by Mitsubishi Heavy Industries (MHI) in December. It will also be the fifth Eurostar in orbit that is equipped with electric propulsion for orbit raising.

Inmarsat-6 has a large 9m aperture L-band antenna and nine multibeam Ka-band antennas. The new generation modular digital processor provides full routing flexibility over up to 8000 channels and dynamic power allocation to more than 200 spot beams in L-band. Ka-band spot beams will be steerable over the full Earth disk, with flexible channel to beam allocation.

“Inmarsat-6 F1 features one of the most sophisticated digitally processed payloads we have ever built and delivers remarkable flexibility, capability and capacity. As a long serving supplier to Inmarsat, having built the Inmarsat-4 and Alphasat satellites, Airbus is proud to continue helping keep Inmarsat at the top of its game with this step change in capability brought by Inmarsat-6,” François Gaullier, Head of Telecom Systems at Airbus said in a statement.