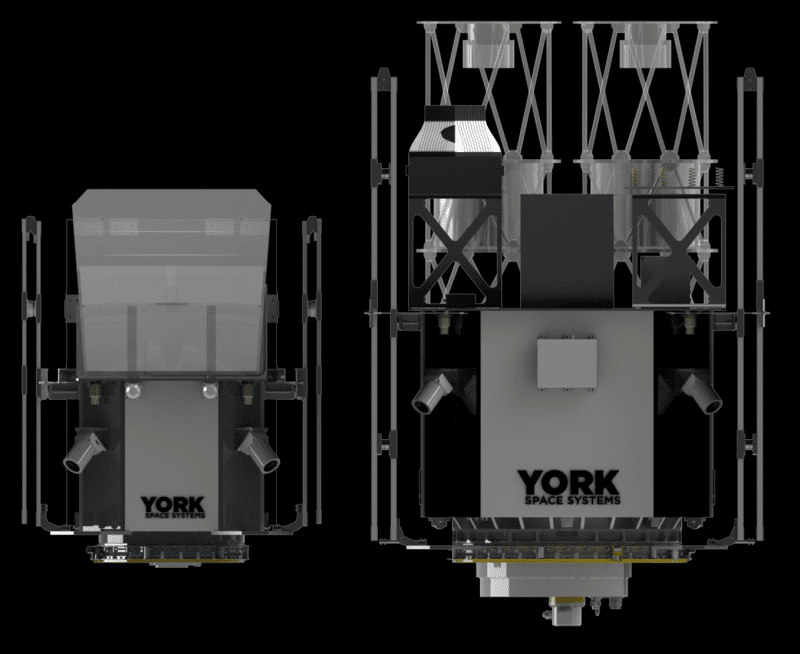 York Space Systems is adding a larger and more powerful platform called the LX-Class to its family of spacecraft platforms.

The new platform is built off of the York S-Class, and reuses 90% of the S-Cass hardware and software design. Like the S-Class, it can accommodate a wide range of missions from communications to Earth Observation (EO). But it offers three times the power generation, and a 300% increase in payload mass. The LX-Class can accommodate a payload mass up to 300 kg.

Putting the spacecraft size in perspective, York CEO and President Dirk Wallinger said the S-Class is about the size of a mini fridge, and the LX-Class is two to three times its size.

Development of the new spacecraft size was driven by demand from commercial and government customers for a larger spacecraft platform with even more capability, Wallinger said.

“Our customers are finding that they’re spending a lot of engineering time to make something smaller, when that’s not necessarily the end goal. The end goal is to have something that’s capable and affordable. They want to spend less time engineering to make things smaller and more time executing the mission,” he said.

Wallinger said the LX-Class expands on cybersecurity protections developed for government customers. It offers more throughput in Radio Frequency (RF) bands and laser bands as well. While the S-Class offers data rate for laser communications in the 1 Gb range, the LX-Class supports rates up to 10 Gb. York works with partners who provide the laser terminal when customers need it.

York Space Systems has begun producing the LX-Class for an unnamed customer constellation, set for delivery in 2022. The company is also in talks with another customer for a constellation as well.

This design is also an expanded capability of what York is building for the Space Development Agency’s National Defense Space Architecture transport layer. York is building 10 satellites for an initial space-based sensor and tactical communications constellation – Tranche O.

Overall, Wallinger said York’s business is about 60% government, 40% commercial. With the new platform size, government customers get the benefits of flight-proven hardware, and commercial customers get capabilities that were built for government missions.

“[On the LX-Class], 90% of the components of products are flight proven. Customers are getting way more capability, but it’s not a new design from scratch,” he said. “The government side wants to see flight-proven systems that work, and the commercial side wants to leverage the cybersecurity protections that are intrinsic in the system because [of our] work for government customers.”