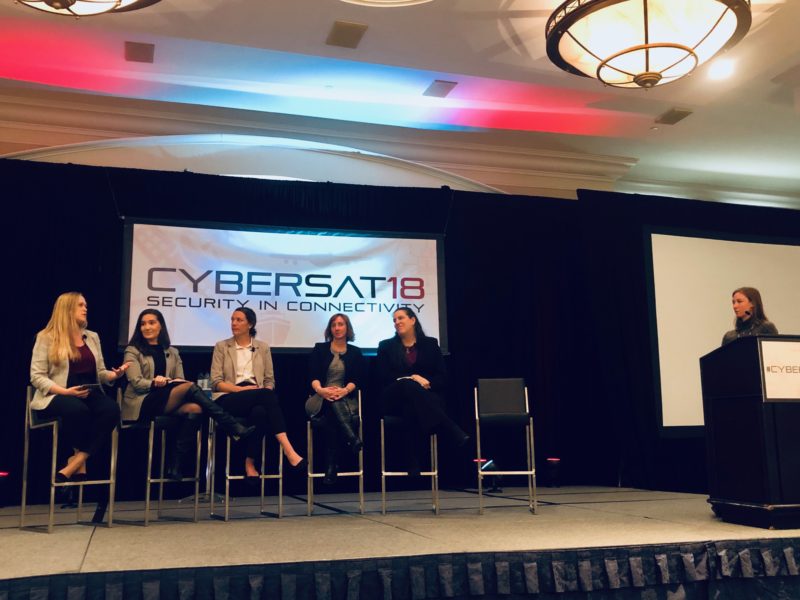 Interconnectedness in the 21st century: Women in Cyber and Space Discuss Realities and Practicalities panel at Cybersat 2018. Photo: Annamarie Nyirady

As cybersecurity becomes an increasingly important piece of the space puzzle, it’s crucial that government and organizations not only understand what’s at stake — but how things actually work. Cybersecurity functions become normalized, just as diversity in thought and process does. Earlier this month, the CyberSat 2018 summit brought together some of the best and brightest in the field to discuss topics ranging from cybersecurity practices in the satellite industry, to broader public and private sector applications.

It’s without a doubt that all industries have seen the increasing importance of maintaining cybersecurity initiatives. Speaking on a panel session titled “Interconnectedness in the 21st century: Women in Cyber and Space Discuss Realities and Practicalities,” Booz Allen Hamilton Senior Associate Allison Mitrovich stated, “Cybersecurity is really just good engineering. We need to change the mindset so we can integrate it earlier.”

As this “good engineering” pertains to the space and satellite worlds, Secure World Foundation Director of Space Applications Programs Krystal Wilson said that getting into cybersecurity is a much broader trend. “It’s not just new companies expanding into new areas, but new space actors emerging globally. Not only are there academic partnerships forming to launch new smallsats, but also other governments,” she said. “Cyber is a place where you can really highlight that change, you have new actors who don’t know about [cyber], or care about it, or just don’t want to have to deal with it. When you have this many new actors, it’s a really concerning trend.”

Harvard University Director of Information Security (IT) Security Education and Consulting Sandy Silk gives a different viewpoint, in saying they’re “not really, actors, but partners,” as the democratization of the entire intelligence ecosystems is becoming more accessible.

Mitrovich elaborates, in calling for more adaptive systems. “We haven’t evolved our practices in how we evaluate cyber. We talk about singular vulnerability – but we’re missing the wholistic view. There is still a huge gap within our policies and their execution. We need more adaptive systems that can be maintained within the current cyber environment.”

Some nations are already answering the call for more adaptive systems. UPDATAD Project Founder Sloane Trugman, the panel moderator, explained how nations like France are rising to the challenge — an example being the Paris Call. These cybersecurity policies are crucial, as networks are being “increasingly porous.”

Additionally, these new actors (or partners) can unlock a host of new possibilities. Deloitte Consultant Jillian Taylor took a look at various cybersecurity applications within the satellite industry. “When you look at the new players coming into the market, there are data companies (i.e., Planet Labs) that want to provide Low Earth Orbit (LEO) services. They can provide massive amounts of data to their clients, 15,000 miles from earth,” she said. The applications are numerous, but “people’s personal data is very important. How we think about it, including who’s supporting that payload, is important.”