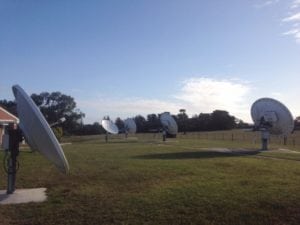 The contract includes refurbishment of the existing 3.7-meter parabolic antennas and feedhorns, and the installation of solid-state antenna controls and satellite tracking equipment. Once upgraded, the 3.7-meter antennas will form part of a network of antennas used to range the Chinese-operated Feng Yun constellation of weather satellites orbiting in Geostationary Earth Orbit (GEO). The ranging conducted at the Crib Point facility is used to pinpoint the location in three dimensions in real time providing critical information to the constellation’s Telemetry, Tracking and Command (TT&C).

In addition to the ranging activities, the antennas will be used to downlink raw weather information and imagery used by the bureau to make periodic weather predictions for a wide variety of stakeholders.