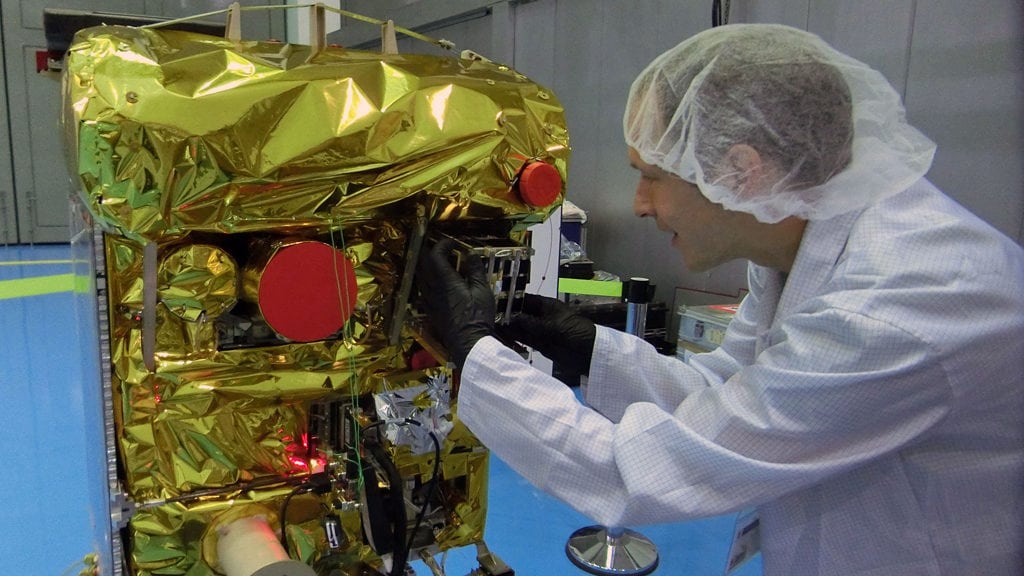 Installing the BREESAT 4 picosatellite into the BRIOS spacecraft. Photo: DLR

[Via Satellite 09-16-2016] The Bi-Spectral Infrared Optical System (BRIOS) fire detection satellite developed and built by the German Aerospace Center (DLR) successfully released the Berlin Educational and Experimental Picosatellite (BEESAT 4) into space on Sept. 9. The spacecraft was released at 515 kilometers above the Norwegian Svalbard archipelago. BIROS was successfully launched from the Satish Dhawan Space Centre in India on 22 June 2016.

Staff and students at the Technical University of Berlin (TU Berlin) developed and built the BEESAT 4 cubic satellite, with sides 10 centimeters long, with support from DLR Space Administration and funds from the German Federal Ministry for Economic Affairs and Energy (BMWi). The satellite should now be able to use the on-board Phoenix GPS receiver to gather precise position and orbit determination information, as well as take series of photographs and individual images of Earth’s surface with a special camera to confirm its position. The telemetry and image data will then be sent to the BIROS “mother ship” that then forwards it to the TU Berlin ground station for analysis.

“Precise knowledge of the position of the picosatellite (CubeSat) is a prerequisite for formation flights for multiple satellites. With the picosatellite class in particular, formation flights offer the advantage that tasks and functions can be allocated to different satellites. Furthermore, multiple satellites enable longer overflight times over ground stations for the transmission of telemetry and payload data. In addition, regions of interest can be flown over multiple times,” explains Sascha Weiss, the BEESAT 4 project leader at TU Berlin. “We are continuing our sequence of picosatellites with BEESAT-4. We specifically want to determine the position of the satellite over the next 12 months using the Phoenix GPS receiver so we can predict the orbit of BEESAT 4.”

The cubesat mission builds on the knowledge and experience of previous BEESAT missions, so the majority of the work is not spent on the construction of the satellite but on developing the complex software. “Two science staff and two students have been on our team since 2013. With the development and operation of BEESAT 4, we have been able to reinforce the practical aspects of student training at TU Berlin’s Institute of Aerospace. Numerous undergraduates have completed their theses within the scope of the mission,” explains Weiss.