Inside Spire: How SmallSats Are Enabling A Successful Startup 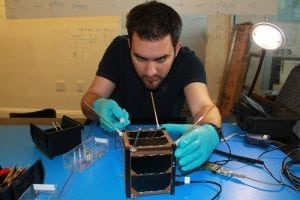 [Via Satellite 08-03-2015] Startups often fail, it’s a well-known fact. Space is hard; this is also well known. Put the two together, and the barrier to entry for new satellite companies could appear insurmountable. Fortunately that is not the case. Today satellite companies are popping up all over the world as the miniaturization of technology makes the cost of putting a satellite in space ever more within an entrepreneur’s reach.

The aforementioned phrases remain true, but more startups are succeeding today in space than in the past. Spire is arguably a textbook example of how to build a space company, or a “space data company,” using SmallSats. Founded in 2013 as Nanosatisfi, the company donned its new name in 2014 while concurrently raising $25 million in series A financing. That investment round turned out to be one of three that would bring the startup more than $80 million to build and launch a sensor network of 20 SmallSats and 20 ground stations by the end of 2015. In the ensuing years, Spire plans to bulk out its constellation to more than 100 SmallSats and create a sprawling ground network of 50 stations worldwide. The first launch is scheduled for September.

SmallSats are a critical enabler for Spire’s business plan. Via Satellite spoke with Spire VP Antoine de Chassy to talk about how SmallSats influence the company, from how it creates valuable services to the way it designs sensors to wooing and convincing investors that the company is for real.

The Why of Spire’s SmallSats

De Chassy said Spire is already cash-flow positive with the customer base it has today. These customers, according to him, are attracted to what Spire can offer thanks to the frequency with which the company intends to provide data. Spire’s constellation is designed with GPS Radio Occultation (GPS-RO) sensors for weather data, and Automatic Identification System (AIS) sensors for maritime tracking. Spire plans to provide five times as much weather data and four times more frequently updated maritime data than available in the past — a task that requires rapid revisit rates with global coverage.

Spire launched four prototype SmallSats to date in order to pave the way for its larger constellation. SmallSats are regularly used for experimental technologies, but that was not their only benefit. Spire’s entire business plan centers around the practicality of such spacecraft. The company builds satellites based on the CubeSat form factor. This, he said, enables creativity in a way that does not balloon costs. 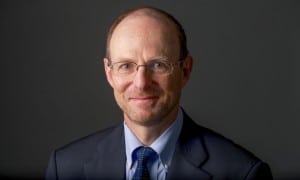 “It’s like jazz music. You can be within a fairly strict harmonic grid and be as creative as you want. But go crazy within that grid. The same is with the CubeSat. We work within the CubeSat so we tell our engineers ‘be the Miles Davis’ of the CubeSat, but think inside the box, actually. The CubeSat is your box. That constrains the cost of development. It does not constrain the innovation,” he said.

SmallSats also enable the company to budget for mistakes. De Chassy said Spire expects it will lose some satellites in the process, but SmallSats provide a wider margin for error.

“We will replace anywhere between 30 and 50 percent of the constellation every year or 18 months. That gives us not only the latest technology up there, but also it gives resilience and continuity of service. I think these are two elements that do not exist in space today. If you have a constellation of two satellites and one fails, you lose more than 50 percent of the capacity and are crippled. The level of risk is way too high. If we lose 20 percent of our satellites, we have 80 satellites still operational. The level of service might be a little less, but continuity of service will be there, and within six months we can launch a new set,” he said.

De Chassy added that Spire outsources resources that are available within operational and quality constraints in order to further keep down costs and make the most of its SmallSats. He said the company wrote off ideas like building its own private cloud network or creating algorithms that can be found readily elsewhere. Consumer Off The Shelf (COTS) equipment is highly valued. If the trade-offs balance out, de Chassy said Spire is willing to invest money to stay efficient.

Spire’s most recent investment round brought $40 million to the company. New investors Bessemer Venture Partners and Jump Capital joined existing investors RRE Ventures and Lemnos Labs, among others in the series B financing round, which Promus Ventures led. Investors are not always familiar with small satellite companies. When introducing Spire to new investors, de Chassy said satellites are not the key discussion point.

“We talk about the clients,” he explained. “I think that’s the big differentiator. We don’t show all the time how cool the technology is, because they know or they don’t, but we do talk about the clients. Each conversation starts like that. It’s ‘do you have customers? Are they really starving for data? Is there a new market apart from the underserved market you have that will be booming?’”

De Chassy also stressed that it is important to validate the success of the investor just as they will seek to evaluate the profitability of a company. Bessemer Venture Partners, a Spire investor, also invested in Skybox Imaging, which Google later acquired. Some investors can also bring technological know-how in addition to business acumen.

De Chassy said Spire’s investment traction gives greater credibility when meeting with potential customers. The U.S. government is one such customer, which many weather startups are pursuing, for which this carries weight. Spire’s current customers include a mix of both government and commercial clients, and the company has a diverse enough customer base to not be anchored to just one. He mentioned that the most recent $40 million is going toward making the first 20 satellites and 20 ground stations a reality.

“Profits will fuel our growth. We are not going to come back to them every year with a need for more money. At some point it has to be sustainable and that’s the point that we will reach,” he said.