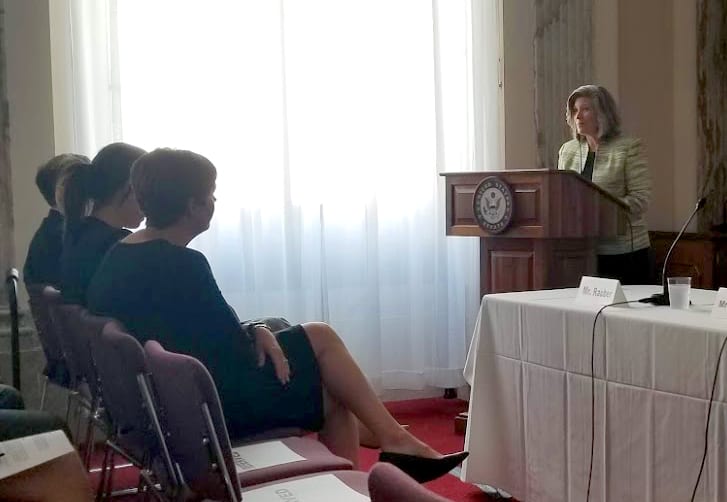 Thanks to GPS satellite-guided tractors, a single U.S. farmer can now feed 165 people each year, compared to just 10 people a few years earlier, according to U.S. Senator Joni Ernst (R-Iowa) and GPS Innovation Alliance (GPSIA) Executive Director David Grossman, who invited Via Satellite and a handful of farm industry associations to Capitol Hill for a briefing on precision agriculture. Now, U.S. farmers are seeking additional satellite imagery and sensing capabilities that integrate with their GPS hardware, while asking regulators to protect the GPS bandwidth.

For the past decade, GPSIA and its member organizations, including John Deere, have been lobbying in Washington D.C. to put GPS tools in the hands of farmers to increase crop yields, lower operational costs, protect animal health, and promote environmental sustainability. “Our concern is not just the integrity of GPS spectrum, but also the integrity of the physical satellite system. We are also working with regulators to improve infrastructure for broadband and close the digital divide,” said Grossman.

The organization has been successful in securing both a powerful ally in Congress with Sen. Ernst, co-chair of the Senate GPS caucus, and grabbing the attention of the Federal Communications Commission (FCC). 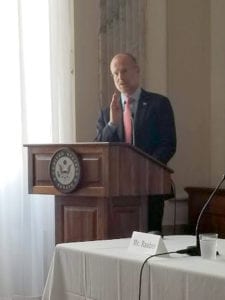 “Our job is to make your jobs a little easier,” FCC Commissioner Brendan Carr told attendees at yesterday’s briefing. “Smart agriculture tools help American framers make precise, ‘inch-by-inch’ adjustments. Today, we can extract 15- to 20-times the amount of data from a single U.S. farm plot than we’ve been able to in the past and store it in the Library of Congress. This enables us to plan for the future and to ensure that American farms remain the most sustainable in the world.”

Jeff Jorgenson, director of the Iowa Soybean Association, spoke at the briefing on behalf of his state’s 42,000  farmers. He is also a farmer, managing one of the larger soybean plots in Southwestern Iowa. He’s been using precision agriculture tools since the mid 2000s. “We’ve dramatically increased our crop yields in recent years, and that’s mostly because of the data we have at our disposal,” said Jorgenson. “This technology is moving agriculture, literally. GPS-guided tractors alone are saving billions in seed by preventing overlap and waste. The next big thing that we see is incorporating infrared, thermal imagery, to layer data tools so that we can plan for planting next year.”

Jorgenson sat with Via Satellite for an interview that will be featured in full, along with a discussion with GPSIA’s David Grossman, in a future episode of our On Orbit Podcast.

When asked if he was working directly with any actual satellite companies on obtaining those desired data tools, he shook his head. “I’ve never been directly approached by any actual satellite or drone companies since I’ve been farming. They don’t talk to us,” he said. “Other than GPSIA, and some associations, we rely on John Deere to teach us how to use and incorporate these technologies. Farmers are stubborn people. This is a labor that has been guided by intuition for generations. We need to be absolutely sure that these technologies work and that there is a clear return on investment. It comes down to who you trust.”

Like many farmers in Iowa, Jorgenson trusts John Deere. John Rauber, who is director of John Deere’s Washington affairs, spoke at the briefing about precision agriculture as a shared economic responsibility. “The world’s population will go from 7.5 billion to 9 billion people in 30 years,” Rauber said. “Because of this, American farmers are tasked to increase food production by 80 percent to 100 percent over a very short period of time, and for purposes of sustainability, they have to use less seed, less land, and less water. The only way we’ll be able to meet that is through increased technology.”

John Deere introduced its Autotrac feature for tractors in 2002. The implementation immediately led to a drastic reduction in seed use for farmers. “Over the course of the last five years, variable rate seeding has allowed producers to place the right product in the soil at the right place at the right time,” said Rauber. “Machine sync features, which allow a single driver to automatically control other machines in the field have dramatically increased productivity. We can pull data from these fleet management applications, and track hours, location, fuel use, and machine performance.”

Most of the John Deere machines in service today are running off of 3G/4G networks. 5G, which Rauber says will be crucial to farmers as increased food demand will require increased automation on farms, will “unfortunately and probably be delayed,” as its prioritized to urban and suburban areas.

The farming community seems to share this sentiment. Bill Beam is both an Eastern Pennsylvania farmer and deputy administrator for farm programs at the U.S. Department of Agriculture (USDA). He said that digital divide and remote connectivity issues are major challenges for farmers. His farm is within 30 miles of Philadelphia and he still occasionally has trouble finding a signal that can support his operators.

“We at the USDA are working together with the FCC on the connectivity problem,” said Beam. “This is especially important as we rely more and more on the cloud, which is a big advancement for farmers. John Deere has an app where we can store all of our mapping and operations data, but because of the connectivity, some of us still have to manually report data. Many farmers still store their data on thumb drives.”

Jorgenson added that his farm also occasionally uses thumb drives to store data. Like Jorgenson, Beam also said he and other farmers in his area rely solely on John Deere and that he hasn’t been approached by satellite, drone, or cloud service providers to help solve these issues.