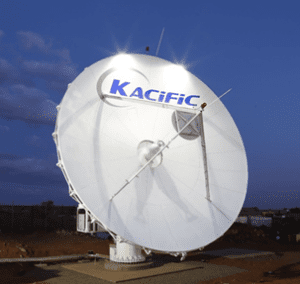 A 9-meter Kacific satellite antenna, similar to the ones being installed at Petro1’s facilities. Photo: Kacific

Kacific Broadband Satellites Group selected PT. Petro One Indonesia (Petro1) to provide ground infrastructure services in Indonesia for its new satellite, built by Boeing, which will launch at the end of 2019. Petro1 will host, operate, and provide first level support for Kacific’s gateway hub at its secure facilities in Surabaya and Pasuruan, East Java, Indonesia.

The primary gateway will include a 9-meter antenna and associated equipment to transmit and distribute data to and from the satellite. An additional diversity site, over 60 kilometers away, will ensure better availability and a redundancy capability. The satellite’s beams cover Indonesia’s islands and surrounding ocean, delivering broadband to telecommunications companies, internet service providers, and governments.

“Kacific chose to locate its ground infrastructure in Indonesia because it is a priority market for us,” says Kacific CEO, Christian Patouraux. “Our high-speed broadband will supplement and augment the Government connectivity programmes which aim to strengthen broadband infrastructure across the nation. Petro1 has a highly trained technical team and access to excellent facilities, which will ensure the optimal performance of the Kacific1 satellite in Indonesia.”