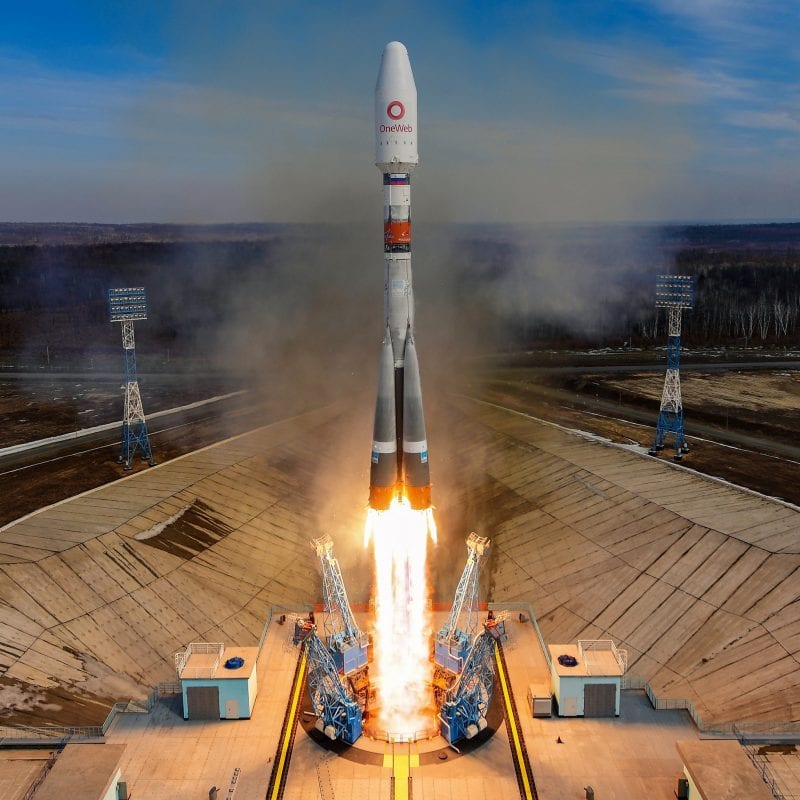 Update on March 3: OneWeb’s board of directors has voted to suspend all launches from the Baikonur Cosmodrome in Kazakhstan, the company said in a statement early Thursday.

An upcoming OneWeb launch from Baikonur Cosmodrome is in jeopardy after Russian space agency Roscomos placed intense demands on OneWeb, launcher Arianespace, and the United Kingdom government, amid war in Ukraine.

Director General Dmitry Rogozin said Wednesday that Roscosmos will not allow the launch unless OneWeb meets its conditions — guarantee the satellites will not be used for military purposes, and that the United Kingdom’s government withdraws its investment in OneWeb.

“Today we are making a request to our French colleagues from Arianespace and OneWeb with the requirement to provide us with comprehensive legally binding guarantees within two days that OneWeb will not use them for military purposes, will not provide services to the relevant military departments,” Rogozin said on Russian TV, according to state news outlet Tass.

Kwasi Kwarteng, the United Kingdom Secretary of State for Business, Energy and Industrial Strategy, tweeted unequivocally that the U.K. government would not sell its share. The United Kingdom owns roughly 19.3% in OneWeb and was a key shareholder, along with Bharti Global, that pulled OneWeb out of bankruptcy.

“There’s no negotiation on OneWeb: The UK Government is not selling its share,” Kwarteng said. “We are in touch with other shareholders to discuss next steps.”

According to Tass and tweets from Roscosmos, Rogozin referenced SpaceX supplying Starlink terminals and internet service to Ukraine, and concerns that OneWeb would do the same.

Rogozin tweeted that he will give the U.K. government two days to think. Without a guarantee of no military use, “there will be no system,” he tweeted.

Neither Arianespace nor OneWeb have put out a statement or responded to Via Satellite requests for comment on Wednesday. Arianespace conducts OneWeb launches from Baikonur in Kazakhstan, using the Soyuz rocket supplied by Russia, in cooperation with Russian affiliate Starsem.

OneWeb’s satellites were already integrated into the Soyuz rocket. Video Rogozin shared on Twitter showed workers covering up the United Kingdom, United States, and Japanese flags on the Soyuz rocket.

Roscosmos plans to keep payment for the launch as well, which has been paid in full. The money will remain in Russia, the director general said.

Russia’s war in the Ukraine is impacting aerospace collaboration between Russia and allied nations. Earlier, Roscosmos suspended cooperation with Europe on launches from the Kourou spaceport in French Guiana and withdrew its technical staff as the spaceport is preparing for a European Galileo satellite launch on a Soyuz rocket.

The European Space Agency (ESA) also announced it would implement sanctions against Russia imposed by its member states. U.S. President Joe Biden said that sanctions would specifically impact Russia’s aerospace industry and space program. For the time being, NASA has proceeded as usual with both U.S. and Russian astronauts currently on the International Space Station.