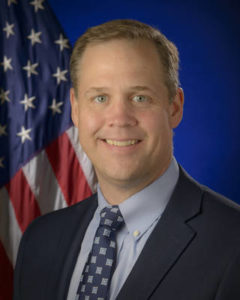 NASA Administrator Jim Bridenstine will deliver the welcome address at SATELLITE 2019’s Via Satellite Awards Luncheon on Wednesday, May 8th at 12:00 p.m. The Administrator will kick off the luncheon proceedings with a speech about new commercial satcom partnership opportunities on NASA space exploration, science, and sustainability projects.

“Administrator Bridenstine has been an ardent supporter of the commercial space industry for many years as a U.S. congressman and now as the head of NASA, and we are honored to have him return to SATELLITE as a special guest speaker,” said Jeffrey Hill, Chair of SATELLITE 2019. “The Administrator is also very excited to lead off an event that recognizes our community’s top executives, emerging technologies, and startups. The Via Satellite and SATELLITE teams have worked very hard to assemble what I believe is the best aerospace conference program ever produced.”

NASA Administrator Bridenstine was nominated by President Donald Trump, confirmed by the U.S. Senate, and sworn in as NASA’s 13th administrator on April 23, 2018. ​Bridenstine was elected in 2012 to represent Oklahoma’s First Congressional District in the U.S. House of Representatives, where he served on the Armed Services Committee and the Science, Space and Technology Committee. The 2019 Awards Luncheon will be his third appearance at a SATELLITE-hosted event.

Tickets for the Awards Luncheon can be purchased through SATELLITE 2019 registration.  During the ceremony, Via Satellite will announce the winner of its 2018 Satellite Executive of the Year award, its inaugural Satellite Technology of the Year award, as well reveal the winners of the third annual Startup Space Entrepreneur Pitch Contest. The winners will be determined by a combination of the Via Satellite editorial team and votes that come directly from industry. Beginning April 19 at 9:00 a.m. ET, the public can vote for the nominees of their choice online, or onsite at the SATELLITE 2019 event.  There will be stations for attendees to vote at the Via Satellite booth (#543 on the show floor).