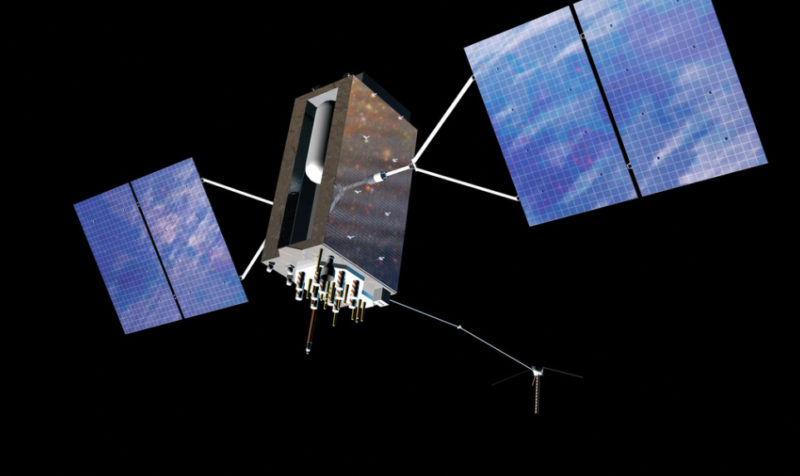 Harris Corp. [HRS] has received $84 million to produce an experimental satellite dubbed Navigation Technology Satellite-3 (NTS-3) that will demonstrate new position, navigation and timing capabilities that could improve the resiliency of the GPS constellation, the company said April 8.

The contract was awarded in December 2018 by the Air Force Space and Missile Systems Center (AFSMC) and the Air Force Research Laboratory (AFRL), and the program seeks to leverage Harris’ longtime experience in developing GPS signals and support to see how a small, rapidly launched satellite can augment the capabilities and resiliency of the GPS constellation and assist with coverage in contested environments.

Harris will design, develop, integrate and test NTS-3, which will simultaneously broadcast military and earth coverage signals at increased power levels, enabling it to operate in contested environments. It is currently scheduled to launch in 2022.

The company will leverage over 40 years of GPS and space antenna experience to support NTS-3. It has been developing and sending PNT signals for the U.S. military since the mid-1970s, when the initial NTS program run by the Navy provided the precursor to GPS, said Chris Forseth, vice president and general manager for Harris’ space superiority business in an April 3 interview with Defense Daily. Harris has provided navigation technology for every U.S. GPS satellite ever launched, he noted.

The goal of NTS-3 is to augment the resiliency and capabilities of the current GPS constellation, Forseth said. The company is using phased array antenna technology for the first time in this area and plans to use next-generation capabilities to create stronger coverage for GPS and “put more waveforms in space,” he added.

The program “is really is trying to drive innovation and experimentation,” he said. “This is something that gets launched; it has focus all the way up to [Air Force Space Command Commander Gen. John Raymond], that allows us to provide additional resiliency into the global position system and augment” the next-generation GPS III follow-on program.

The time keeping system will use a variety of timing sources intended to improve mission stability, anomaly detection and correction, and its design will enable Harris to rapidly develop and deploy new waveforms to reprogram and update the satellite throughout its lifecycle, the company said in a Monday press release.

The Defense Department partnered with the Air Force Research Laboratory as well as the Air Force’s GPS program office on this effort, Forseth said. It is a prime example of what the Air Force Space and Missile Systems Center (AFSMC) at Los Angeles Air Force Base is trying to leverage with its SMC 2.0 effort, he noted: “How do you take programs of record and keep the innovation pipeline open?”

The contract was awarded using Other Transaction Authorities, and timeline from Harris presenting its first white paper to contract award was around six months, he said.

The Space Enterprise Consortium (SPeC) assisted with the contract programmatics, but it was awarded by AFRL and AFSMC in December 2018 under a full and open competition, Forseth said. SPeC is a group of small and large organizations representing traditional and non-traditional defense contractors initiated by AFSMC to assist with research, development, test and evaluation efforts within prototyping projects for DoD space missions.