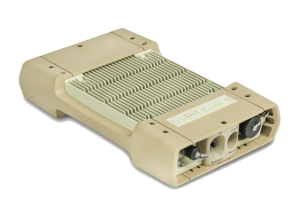 iDirect Government, a provider of satellite communications to the military and government, has unveiled its 9050 OM ruggedized satellite router. The 9050 OM features enhanced security, military environmental standards and improved functionality in a ruggedized form factor for operation in harsh outdoor environments.

A 950mp integrated satellite router board resides at the heart of the 9050 OM, which protects the board from the elements including blowing rain or dusty conditions.