Manned Flights to the Moon Will Lead to Mars, Says President Trump 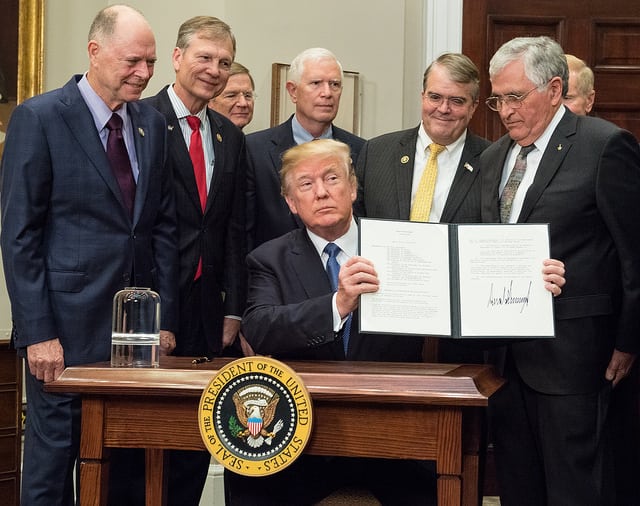 President Donald Trump holds up the Space Policy Directive-1 after signing it, directing NASA to return to the moon, alongside members of the Senate, Congress, NASA, and commercial space companies in the Roosevelt room of the White House in Washington, Monday, Dec. 11, 2017. Photo: NASA/Aubrey Gemignani.

President Donald Trump signed a directive Dec. 11 instructing NASA to send American astronauts to the Moon for the first time since the Apollo 17 mission 45 years ago.

At a White House signing ceremony for Space Policy Directive-1, Trump said that “long-term exploration and use” of the Moon will restore U.S. leadership in space and lay the foundation for eventually sending humans to Mars and possibly beyond.

“This is very exciting and very important for our country,” Trump said. “It also happens to mean jobs.”

NASA said that “work toward the new directive will be reflected” in its fiscal year 2019 budget request, due out in February.

The directive formalizes an administration plan that Pence announced in October at the first meeting of the newly revived National Space Council, which he chairs. At the time, Pence called the Moon a “stepping stone” to other deep-space destinations, and Lightfoot said that NASA would develop a plan to implement the administration’s new direction, which includes working with industry and other nations.

While NASA has been developing the Space Launch System (SLS) heavy-lift rocket and the Orion crew capsule to take astronauts beyond low Earth orbit, the Obama administration had deemphasized the Moon in favor of sending humans to an asteroid and Mars.

NASA plans to conduct the first SLS flight with an uncrewed Orion in December 2019. The first crewed flight is slated for 2023.

Eric Stallmer, president of the Commercial Spaceflight Federation, said the “U.S. commercial space industry has invested hundreds of millions of dollars in private capital to develop innovative capabilities for lunar transport, operations and resource utilization. [The federation] recommends that the administration challenge NASA to leverage these commercial capabilities to generate greater efficiency, and to partner with industry through flexible, innovative contracting approaches, to achieve the goals set out in Space Policy Directive-1 as quickly as possible.”

This story was originally published in Defense Daily, a Via Satellite sister publication. It has been edited to better serve our audience.