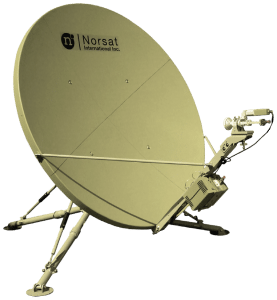 [Via Satellite 02-202-2015] Norsat has received an order for $3.5 million worth of satellite terminals from a defense contractor for a Eurasian Ministry of Defense (MOD). The customer is purchasing products such as the 1.2 meter Rover, an ultra-lightweight fly-away satellite terminal, the 1.8 meter SigmaLink transportable satellite terminal optimized for base camps or other prolonged missions, and the 1.2m VSAT antenna bundle, along with the 0.75 meter and 1 meter shipboard terminals for the Army and Navy.

The defense contractor has also ordered Norsat’s new 0.9 meter Journey Manpack, a 25-kilogram rapidly deployable satellite terminal. Norsat plans to ship most of the terminals late this year, with follow on deliveries throughout 2016.