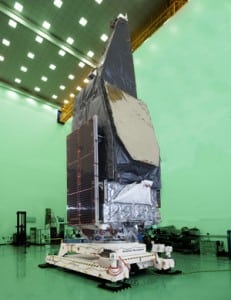 Boeing’s second 702HP satellite for the Mexican Ministry of Communications and Transportation, the Morelos 3. Photo: Boeing

[Via Satellite 06-10-2014] Boeing has announced completion of the second Mexsat 702 High Power (HP) geomobile satellite for the Mexican Ministry of Communications and Transportation (SCT). The satellite, Morelos 3, will join the first Mexsat 702HP satellite, Centenario, in storage prior to its launch scheduled for as early as 2015.

The two satellites along with the two Mexsat ground stations will together form the Mexsat mobile communication system, which will provide mobile, voice and data services for government agencies and improve communications in remote areas of Mexico.

The launch will take place at the Air Force station in Cape Canaveral, Fla. by Lockheed Martin Commercial Launch Services aboard an Atlas 5 rocket.