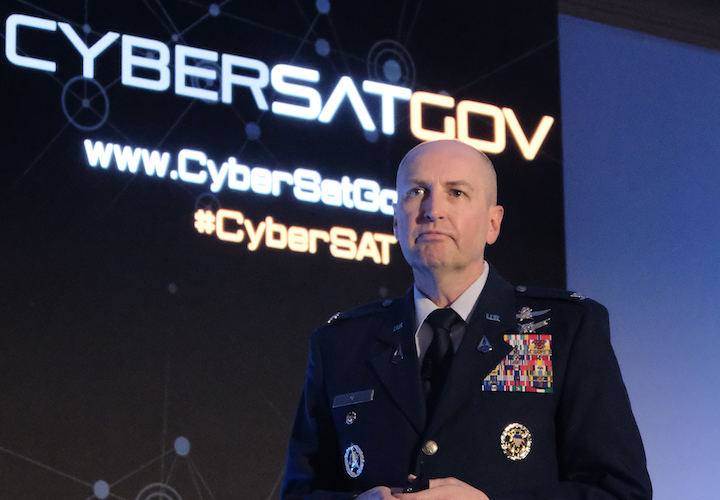 “Our adversaries are coming after us in cyberspace,” U.S. Space Force Col. John Smail did not mince words in a Nov. 4 CyberSatGov keynote.

The U.S. needs to be ready to defend itself in cyberspace against Russia and China’s cyber capabilities, said Smail, senior cyber officer for the Space Force.  Smail, who advises the Chief of Space Operations on the U.S. Space Force’s cyber, spectrum and warfighting communications policy, strategy, and operations, said cyber operations are “critical” to the U.S. Space Force and to secure U.S. space power.

Of the warfighting domains, space is particularly intertwined with cyber, he said. Smail pointed to the seven spacepower disciplines laid out by the Space Force in the inaugural space capstone publication “Spacepower” —  orbital warfare, space electromagnetic warfare, space battle management, space access and sustainment, military intelligence, cyber operations, and engineering/acquisitions. These disciplines cannot be performed without cyber operations, he argued.

“Space is unique in the domain that it is really dependent on cyber. Other warfighting domains are not in cyberspace all the time,” Smail said. “You have no space power without cyberpower.”

Delta commanders will have cyber squadrons attached to their delta, he said. “[For a] cyber squadron commander, although they will be defending systems at the end of the day, their primary purpose is ensuring the mission of the delta commander.”

“I think we are moving into an era where vulnerability management is not just a cybersecurity thing, it is moving into an area of operations, if it hasn’t already. We have to continue to close that OODA loop,” Smail said, referencing the four-step decision-making process of observe, orient, decide, act.

“If we get into a conflict, and nation-states are breaking out some advanced capabilities, we’re not going to be able to just sit there and talk about — ‘We’ll get to that in the next big Block release’ — that is not going to work,” he continued. “We need to exercise these processes now. It means agile development, agile processing. It means changing the culture, and bringing acquisitions and operations closer and closer together.”

The U.S. is the last nation that wants to see conflict in outer space, Smail said. “We are trying to build a force to deter conflict in space. But if it comes at us, we’ll be ready to defend its capabilities.”