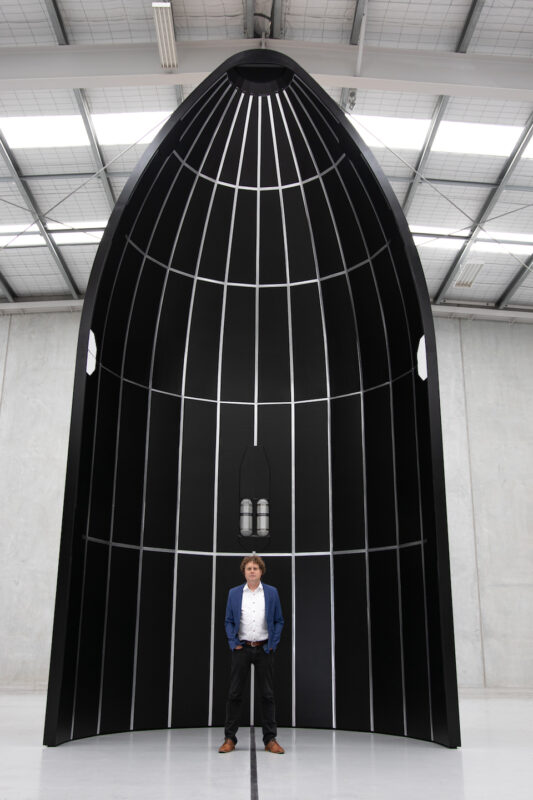 Rocket Lab CEO stands in a fairing half of the Electron rocket. Photo: Rocket Lab

Rocket Lab on Monday announced its plans to go public through a merger with Vector Acquisition Corporation, in a deal that will value the company $4.1 billion. A group of 39 institutional investors have committed to participate in the transaction through a significantly oversubscribed PIPE of approximately $470 million.

Rocket Lab, headquartered in Long Beach, California is a leader in small satellite launch. The company has executed 18 launches since 2017, deployed 97 satellites to orbit with its Electron rocket. The company is also working toward rocket reuse, and successfully performed a first stage splashdown in a November 2020 launch. The company is targeting first re-flight of a full booster for 2022. But Rocket Lab is more than a launch company, and is working toward being an end-to-end space solutions company offering turnkey satellites and spacecraft components, launch, and on-orbit operations. Its first configurable Photon satellite was launched in August 2020.

Rocket Lab is the latest in a growing list of space companies to announce plans to go public through a SPAC, including Earth Observation (EO) firm Spire Global, which also announced its plans on Monday. But the launcher reports the most revenue of any of the series of companies, including BlackSky, Momentus, and Astra.

“In the history of spaceflight, Rocket Lab is one of only two private companies that has delivered regular and reliable access to orbit. Not only are we the leader in small launch, we are the second most frequently launched rocket in the U.S. annually and the fourth most frequent launcher globally,” CEO Peter Beck commented in the release. “This milestone accelerates Rocket Lab’s ability to unlock the full potential of space through our launch and spacecraft platforms and catalyzes our ambition to create a new multi-billion-dollar business vertical in space applications.”

The transaction is estimated to be completed in the Second Quarter (Q2) 2021 and the combined company will trade under the Nasdaq ticker symbol RKLB.

The SPAC news from Rocket Lab came with the announcement that the company is working on Neutron — a much bigger rocket than Electron. Neutron is specifically designed for constellation deployment, for batches of satellites that need to be launched to different orbital planes.

Rocket Lab said an analysis of large constellations pointed to the value of an 8-ton class rocket. The company specifically mentioned Telesat’s Lightspeed broadband constellation as a use case for Neutron — with satellites that must be launched to 20 different orbital planes.

The medium-lift Neutron rocket will be a two-stage launch vehicle that stands 40 meters tall with a 4.5-meter diameter fairing and a lift capacity of up to 8,000 kg to Low-Earth Orbit (LEO); 2,000 kg to the Moon; and 1,500 kg to Mars and Venus. Neutron will feature a reusable first stage, and will also be capable of International Space Station (ISS) resupply and human spaceflight missions.

“We’ve listened to our customers and the message is clear — biggest doesn’t always mean best when it comes to constellation deployment,” Beck commented. Efficiently building the mega constellations of the future requires launching multiple satellites in batches to different orbital planes. It’s a requirement that all too often sees large launch vehicles fly with payloads well below their full lift capacity, which is an incredibly expensive and inefficient way to build out a satellite constellation. Neutron’s 8-ton lift capacity will make it ideally sized to deploy satellites in batches to specific orbital planes.”