Should Disaster Response Be a Good Business for Satellite? 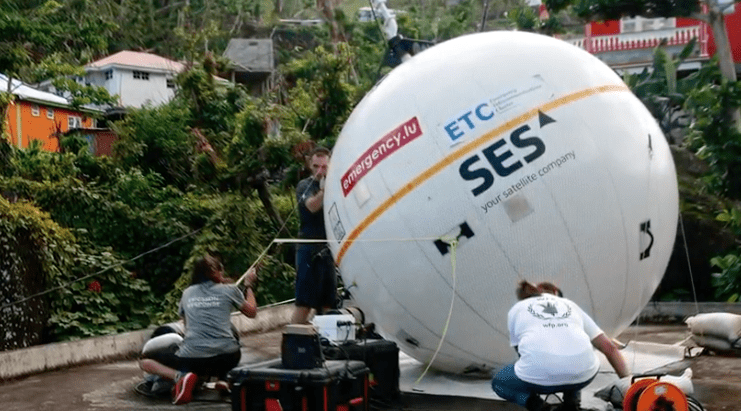 emergency.lu set up antennas to connect relief workers on the Caribbean island Dominica in the wake of Hurricane Maria. Photo: SSPI

In 2018, natural disasters claimed 10,400 lives and caused $160 billion worth of damage, according to German reinsurer Munich Re. That’s down from $350 billion and 13,000 lives lost in 2017. With climate change accelerating at a terrifying pace, the numbers are likely to surge upward again.

Given a disaster response “market” of that size, it is no surprise that businesses – not just government agencies – exist to serve it. Engineering and construction companies are obvious candidates, as are all the companies that produce infrastructure components. Private healthcare is another. There is even an industry of companies that clean mold and smoke damage, recover damaged paper records, and refurbish electronics.

For the satellite business, however, disasters are a puzzle. From its earliest days, the industry has been proud to be the connectivity option that works when everything else fails, whether it be on ships at sea or in a flooded city. When disaster strikes, the phones light up with orders, the emails pour in, teams are dispatched on the ground, and capacity allocated in the sky. But disasters strike with little warning, and these instances are rare, making it tough to develop a business model that can justify the cost of staff, equipment and capacity standing idle, waiting for the next Big One. It’s a classic peak-and-valley business problem.

The United Nation’s Crisis Connectivity Charter represents one approach to smoothing the peaks and valleys. Recipient of the Society of Satellite Professionals International‘s Better Satellite World Award in 2018, the Charter improves coordination among all the parties responding to disaster by prioritizing access to bandwidth for humanitarian purposes, pre-positioning equipment and transmission capacity in high-risk countries, and providing training to the first-responder community. It was the product of negotiations among the U.N., EMEA Satellite Operator’s Association (ESOA), GFV, and private companies. It is a noble example of our industry’s commitment to making this fragile world safer for humanity. But it’s not a business model.

Two companies in our business, one large and one small, demonstrate the range of possibilities for creating a permanent capability to restore connectivity in the wake of disaster.

SES is a leading partner in a public-private partnership that includes the government of Luxembourg, the tech company HITEC Luxembourg and Luxembourg Air Ambulance. It’s called emergency.lu. This service puts quick-deploy systems on the ground and bandwidth in the sky to re-establish communications for emergency responders. In the wake of the devastating double-blow of hurricanes in the Caribbean in 2017, emergency.lu’s inflatable satellite antennas and SES C-band capacity gave first responders a vital link to the world. It brought them not blankets or food, but information, which let aid groups and governments act smarter and faster and coordinate their efforts for maximum effect. You could argue that, in the long run, the value of that weightless cargo was much higher than that of more visible aid.

What’s the business model?  The government of Luxembourg pays the bill, making the service available as a free public good to the humanitarian community worldwide.

A completely different approach is taken by Knight Sky, an American company that provides satellite and wireless services to the military, federal agencies, state and local governments and others. Supporting disaster response and recovery is a core part of its business. Its SkyMAX service includes satellite connectivity and a big range of communications gear on the ground, from satellite terminals to mobile phones and tablets that connect to satellite-backhauled wireless networks the company deploys. Most vital are its people, who go to the disaster site to provide hands-on support to first responders for the duration of the emergency.

Knight Sky also helps agencies and businesses plan for the next disaster and pre-set the capacity and technology needed for response, recovery and restoration. Their business model? They get paid for it, because preparedness is core to the agencies and governments they work for, and they successfully make the economic case we all know to be true: that an ounce of preparedness is worth a pound of cure.

There’s always another disaster.  Every year brings windstorms and floods, wildfire and earthquakes, outbreaks of disease and volcanic eruptions. That’s why public and private organizations commit to respond, restore services and help with recovery. Nobody likes to profit from the suffering of others. But the more creative ways the satellite industry finds to make disasters a good business, the better the world will handle the next one.