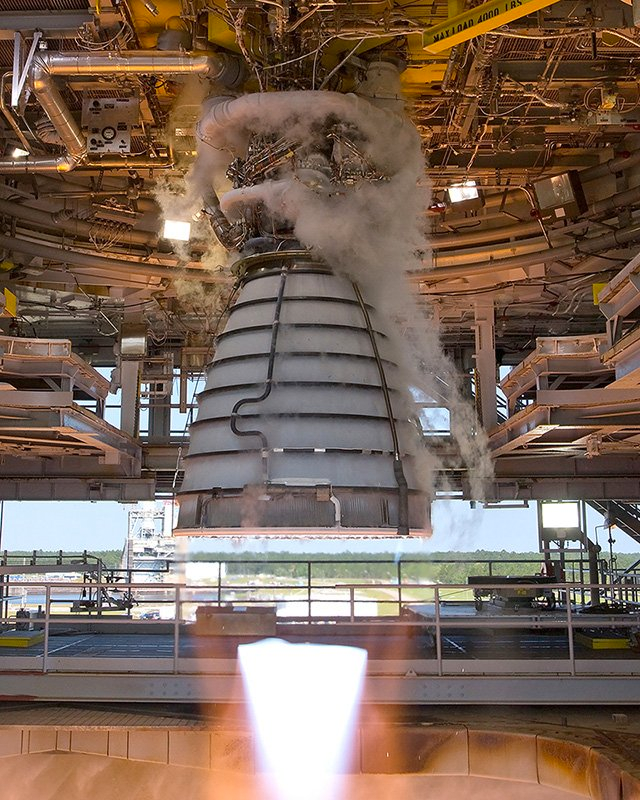 NASA and Aerojet Rocketdyne hot-fired an RS-25 engine in a test that marked another milestone toward the first crewed flight of the agency’s Space Launch System (SLS), while laying groundwork for future production of the heavy-lift launch vehicle’s main propulsion system. The 365-second test at NASA’s Stennis Space Center near Bay St. Louis, Mississippi qualified the controller for the third of four RS-25 engines that will power the SLS first stage on Exploration Mission 2 (EM 2), which will send astronauts to an area near the Moon in the early 2020s. It will be humankind’s first foray beyond Low Earth Orbit (LEO) in nearly 50 years, NASA said.

Also on the test engine was an additively manufactured component designed to dampen engine vibrations that could create stability issues during flight. The pogo accumulator assembly, the engine’s largest additively manufactured component to date, has now performed successfully on two successive RS-25 hot fire tests. The first test was on Dec. 13, 2017.

The RS-25 program has 16 engines left in its inventory from the space shuttle program that are currently being repurposed for SLS, which will make its debut in 2019 carrying an uncrewed version of NASA’s Orion spacecraft. These legacy engines are being upgraded and modernized for the first four flights of the SLS. Aerojet Rocketdyne is increasing thrust from 491,000 pounds on space shuttle missions to 512,000 pounds for SLS. The new controller — essentially the brain of the engine — weighs less and has more processing power than previous versions, making the engine more responsive to vehicle commands.