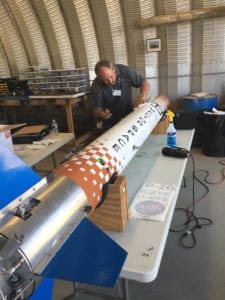 [Via Satellite 08-04-2016] Micro-satellite launch company Vector Space Systems has finalized an agreement to conduct 21 launches for Finland-based Iceye‘s commercial Synthetic Aperture Radar (SAR) satellite constellation. The payload flights — Vector’s first customer flights since starting operations in early 2016 — are to be conducted over a four-year span as part of a larger partnership with Iceye.

Launch missions for the customer are to start on the Vector Micro Satellite Launch Vehicle beginning in 2018.

“Our orbital launch capabilities are on a fast track for a debut flight in 2018, and we are continuing with our propulsion development and qualification testing, as well as vehicle manufacturing,” said Jim Cantrell, CEO and co-founder of Vector Space Systems.

Iceye’s first prototype satellite is scheduled to launch in the second half of 2017. The radar satellite constellation is intended to provide 24/7 all-weather imaging of the Earth’s surface, as well as monitoring of arctic regions in support of safety for the environment and maritime operations. The startup plans to launch its constellation using Vector’s micro satellite launch system at select launch locations, including the Pacific Spaceport Complex Alaska (PSCA).