It all Started with a Suit: The Story Behind Shotwell’s Rise to SpaceX

As the president of SpaceX, Gwynne Shotwell is at the cutting edge of innovation in our industry. The story of how she got to this position is an inspiration for young women everywhere. 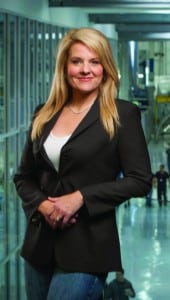 A sharply dressed female engineer who was a speaker at a Society of Women Engineers’ event in 1979 at the Illinois Institute of Technology in Chicago was the connection for Gwynne Shotwell to pursue a career in mechanical engineering, which would ultimately lead her on a path that would take her all the way to the heights of SpaceX, working for Elon Musk. Up until that fateful day, Shotwell, a straight ‘A’ student, was not sure where she wanted her career to lead; but that Saturday, things changed.

“I was a grumpy teenager. I didn’t want to be at that event. But, there was a female mechanical engineer that sat on the panel. I was fascinated with what she had to say. She owned her own company, she was developing construction materials that were environmentally friendly, [and] she also had a play with solar energy. I was fascinated with what she did but I also loved her suit,” Shotwell says. “I went up to her after her panel discussion and talked with her about her suit and also what she did. I left that event thinking I could be a mechanical engineer. … I don’t know if I would have gone up to her if she had not been so sharply dressed. I was more comfortable talking to her about her suit than her career; that was part of my connection to her.”

Now, more than 30 years later, Shotwell is at the top of her industry and a role model for many. She has developed the Falcon manifest to more than $5 billion in sales. She calls that Saturday afternoon back in the late ‘70s “a defining moment” for her career. “I was a good student, but I then became far more dedicated to my physics class than I otherwise would have been,” Shotwell says. “It was rather fortunate I went to this event. I ended up getting quite lucky as a result.”

Unlike many in the space industry, Shotwell did not have any particular fascination with space as a young child. “I did not watch Star Trek as a kid. There was not a lot of aerospace industry in Chicago where I grew up, so I did not have a lot of exposure to it,” she says.

Shotwell does admit, however, that she had more of an interest in cars. One of her first jobs would be with Chrysler Motors in Detroit, but she ended up frustrated because she could not do any hard-core engineering, so she went back to Northwestern University to get an advanced degree. But the working bug had gotten to Shotwell and took her to Los Angeles for her first experiences working in the aerospace sector.

“One of my professors ran into me when I was back at my graduate program and said ‘you should move to L.A. and work at this company [Aerospace].’ So, that is how I ended up in Los Angeles,” she says. “I was at Aerospace for 10 years. I learned a huge amount about the technology for satellites as well as launch. … I recognized in my time there that the government did business one way and there was a different way to get things done in the commercial industry. So, I started looking out for commercial opportunities and I ended up at a little company called Microcosm. It was a neat little company. They gave me quite a big role and I was able to hone my skills as both a business developer, which is basically a sales person, and a senior corporate leader.”

It was at Microcosm where her path would cross with Elon Musk, one of the most talked-about entrepreneurs of his generation. Dr. Hans Konigsmann, a colleague of Shotwell’s at Microcosm, was lured to work with Musk at SpaceX in the early part of the last decade. While taking Konigsmann for a congratulatory lunch, she ran into Musk, who ended up interviewing her for a VP of sales position at SpaceX.

“It was random, actually. I wasn’t looking for a job. I had been at Microcosm four years; that is not a long time to be in a job, but it is hard to walk away from an opportunity to work with Elon for sure,” she says. “You could characterize all the early leaders at SpaceX as being very knowledgeable about the industry but wanting to change things dramatically and get the industry moving at a much faster pace.”

In 2008, as the SpaceX story started to grow, Shotwell took on more responsibility helping Musk clinch key contracts with the likes of NASA. “I was hired in 2002 and I took on all aspects of customer relationships,” she adds.

While working in the satellite industry is a challenge for any woman looking to make her way up the ladder, Shotwell does not have any personal experience that leads to a conclusion that sexism is really prevalent in the industry. However that is not to say that she has not been a victim of it in the past. When Shotwell was an undergraduate, there was an internship position for mechanical engineers available with an air conditioning company that she was interested in. After submitting her resume, Shotwell was offered the position with no interview.

“The week before I was to start, my new boss called me to talk about the role. And he was shocked when I answered the phone; he said, ‘You’re a girl.’ I guess Gwynne is a name that is not (gender) specific,” she says. “He said, ‘there is no way you can do this job as there is heavy lifting involved.’ I said ‘I am an athlete, I played basketball in high school and was on the lacrosse team as a freshman in college, and I could probably kick the butts of all the guys you are going to hire as an intern.’ But he said it is impossible and hung up on me. That was the only time, ever. But I have no doubt I have walked into meetings at aerospace companies, which try very hard to be completely neutral on gender, and I am sure some have thought: ‘Who the hell is she?’ If you are competent, prepared, helpful and work beyond your sphere of influence, you will make your way.”

Shotwell is keen to bring young women into the industry. She admits she finds it hard to turn down an offer from a college when they ask her to relay her experiences to students about being an engineer. However, despite the undoubted progress there has been in bringing women into the satellite industry, Shotwell believes more still needs to be done to demonstrate that engineering is a great career path for women.

“There are women in key leadership positions, but we are missing women in important middle management roles. That is the test bed; that is where you create new leaders. In order to populate that, you need to have more women as new employees,” she says. “There is no question that women are starting to enter engineering programs at a much higher rate. I think some of the best engineering schools have women entering at the 28 to 30 percent range — some even up to 40 percent. If you are increasing the pool of new graduates that are women, that will filter up. I think it is important to speed up the process a little bit.” In terms of SpaceX, Shotwell believes the company has a lot of “extraordinary women;” around 15 percent of the engineers are now female.

Her Advice for the Future Generation

So, what advice would Shotwell give young women starting out in the industry today? “You have no control over whether you are going to be the smartest person at your company or even the smartest person in the room at any particular time,” she says, “particularly at a company like SpaceX; there are a lot of smart people here. But, you do have control on how prepared you are, how hard you work and what kind of results you get.”

Shotwell highlights one company that has a great approach for exposing little girls to science and engineering. “For whatever reason, engineering has not attracted women. There are a lot of interesting changes going on. Take a little toy company called GoldieBlox, which is a great example of trying to connect young girls with engineering. Their products give little girls exposure to fundamental physics and engineering principles. It takes the scary aspect out of them and makes the concepts far more approachable,” she says. Things have changed culturally and Shotwell says engineers are seen as far more acceptable, even fashionable nowadays — she says she is “proud of being a nerd.”

“If you look at Silicon Valley, some of the wealthiest people are technology entrepreneurs. It is not just becoming OK to be an engineer and nerdy; nerds have become the cool people,” she says. “My daughter is a freshman in the engineering program at Stanford, and there they proudly call themselves ‘Nerd Nation’ and they wear those nerdy glasses at the football games,” she says.

How Fate Plays a Part

Recently, SpaceX has launched its first two commercial satellites and delivered a successful payload to the International Space Station. While a lot of plaudits will rightly go to Elon Musk, Gwynne Shotwell is one of the most influential executives in our industry and an inspirational figure and role model for young women. It seems like that afternoon in Chicago was truly a pivotal moment. A stylish stranger in the late ’70s, when it was even tougher for women, blazed the trail for Shotwell, who is now doing the same for others. Since that chance meeting, Shotwell has tried to track down that woman who inspired her to go into engineering, as yet, without success. But, what happened on that day in ’70s for Shotwell will continue to live on. VS