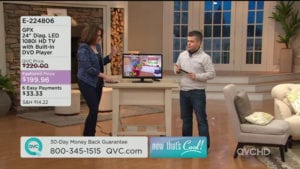 [Via Satellite 01-03-2017] The QVC television channel is broadcasting its new High Definition (HD) channel through Giglio Group’s M-Three SatCom business unit using Eutelsat Hot Bird satellites on 13 degrees East as of December 2016, the Giglio Group announced on Dec. 27. The HD broadcast is part of QVC’s plans to transition from standard to HD viewing.

QVC is a multimedia shopping platform that reaches 360 million users worldwide through cable television, via satellite, digital terrestrial and online platform, and has a total value of just under $1 million. Through the agreement, M-Three SatCom will deal with the management of the signal for the next three years. In addition, it confirms the M-Three expansion trend for the broadcasting and telecommunications divisions of the Giglio Group.

“Thanks to the recent confirmation of the new structure for the Hot Bird distribution, which sees M-Three among the official operators selected by Eutelsat for this service, and to the growing demand for quality in TV broadcasting, which can be obtained through a smooth transition to HD, the Hot Bird and the relationship with Eutelsat again confirms it being a fundamental asset for the group,” said Alessandro Giglio, president of the Giglio Group, in a statement.

The M-Three teleport has already been broadcasting the QVC channel in standard format since 2010. It will continue to manage the same signal in parallel with the new HD channel, which officially launched on Dec. 5, 2016.