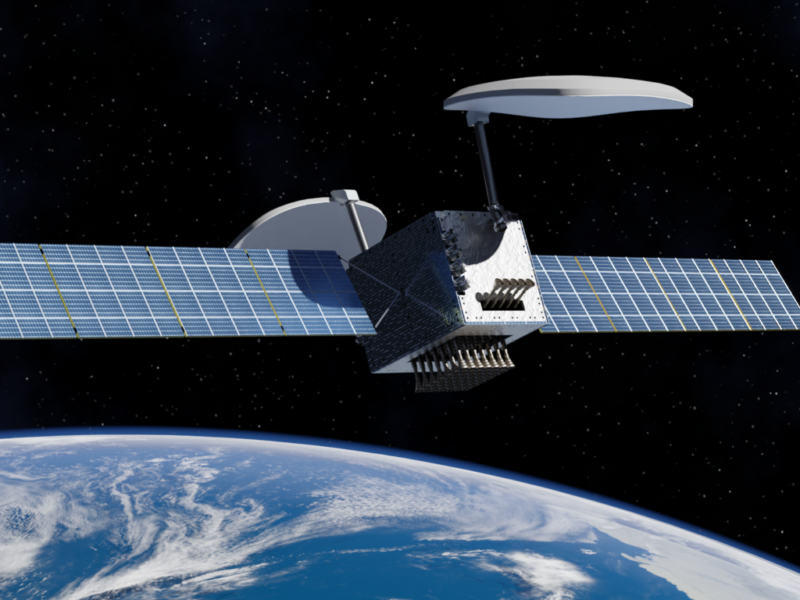 While progress with the man Low-Earth Orbit (LEO) constellations continues, there are still some exciting things going on in Geostationary Orbit (GEO). SWISSto12, a provider of payload systems for telecoms satellites based on 3D printing technologies and Saturn Satellite Networks, a developer of small GEO satellite missions, are joining forces to build and market GEO telecom missions based on both MicroGEO, Intelligent Space Node (ISN), and Nationsat satellites. The companies announced their collaboration at SATELLITE 2021, and said it will provide low-cost connectivity from GEO with small satellites.

In this interview, Tom Choi, CEO of Saturn Satellite Networks, and Emile de Rijk, CEO of SWISSto12, talk about this collaboration. Choi believes GEO satellites can offer a compelling solution to a number of different customer sets going forward.

VIA SATELLITE: What are the benefits of this collaboration between Saturn Satellite Networks and SWISSto12?

Choi: Both Saturn and SWISSto12 have been approaching the small GEO segment independently with Saturn having heritage and experience of manufacturing and operations experience of GEO satellites and through the heritage established by our M&A transaction with Novawurks. SWISSto12 is the world’s leading supplier of advanced digital 3D printed payloads. Both parties complement each other with expertise in their respective fields and together become a much stronger solutions provider for small GEO customers that are looking for light weight, low cost, and low risk solutions to meet their requirements.

VIA SATELLITE: Why is small GEO a compelling solution for some customers?

Choi: The 2kW MicroGEO lead by SWISSto12 with the platform provided by Saturn will be the lowest cost GEO satellite to ever be placed into orbit. With a separated mass of only 500 kg, we can take advantage of so many different launch vehicles that are coming to the market, as well as take advantage of various ride share programs available from the larger rocket manufacturers. It would be the perfect satellite to augment capacity in an existing orbit, or a very low risk way to start a new orbital position. The Intelligent Space Node (ISN) is a more ambitious project lead by Saturn with the payload supplied by SWISSto12 where we will directly inject to GEO more than seven 5kW HTS satellites that will have around 50 Gbps each. With a dynamic beam-forming payload we can operate in any orbit and create large amount of capacity for any customer. The best feature of the ISN satellite program is that we make them available for lease to operators on a full or partial basis. It is likely that the ISN will be lowest priced High Throughput Satellite (HTS) capacity in the world.

VIA SATELLITE: What excites Swissto12 about this collaboration with Saturn Satellite Networks?

de Rijk: We have been addressing similar market opportunities with smallsats in GEO with a complementary set of strengths and spacecraft sizings. When Tom and I started discussing this collaboration, we were immediately fascinated by the potential synergies it would offer and the benefit generated for end customers in combining cutting edge products as well as offering a comprehensive set of satellite sizes to address the variety of mission requirements.

VIA SATELLITE: What is your technology roadmap over the next 12 months? What is the next evolution of your 3D technologies?

de Rijk: We are busy developing GEO qualified electronically steered antennas that are key to next generation payloads and that greatly benefit from the design freedom offered by our unique 3D printing technology in terms of performance, weight and size. This ability to make advanced payloads in more compact form factors thanks to 3D printing is key to the figures of merit of a telecom satellite, as it allows for more capable payloads to be embarked onto smaller platforms thereby reducing the overall mission costs while meeting high throughput performance. We are working together with best in class partners in the various building blocks of payloads to engineer and produce uniquely competitive systems. For the space industry, the use of 3D printing is only at its beginning, with SWISSto12 pioneering its use for Radio Frequency (RF) applications. Many opportunities still exist to adopt the technology further and move to increasingly payload centric and efficient satellite designs.

VIA SATELLITE: What do you expect the dealflow to be for these small satellites? What kind of customers are you targeting?

Choi: The customers are likely to be governments, existing satellite operators, and new entrants. The current pipeline for these satellites are over $1 billion dollars today, with early commitments in the hundreds of millions of dollars. We see a significant opportunity for these satellites. We plan to launch the more than seven ISN satellites within the next three years and we see similar demand for the MicroGEO in that timeframe.

The ISN business model will represent a significant reduction in pricing for GEO HTS services, far below the pricing today. We believe this will create a host of brand-new applications including taking market share from costly microwave links that are being used to connect very remote locations. We also see that the market for rural community and school connectivity will significantly increase as a result of the lower pricing. In addition, providing back up services for terrestrial links will be an interesting application for our payload as capacity and beams can be created real-time and on-demand. We believe the market can more than double by lowering the pricing significantly.

VIA SATELLITE: How many countries/governments have expressed an interest in these satellites?

Choi: There are 150 countries in the ITU [International Telecommunications Union] that do not own or operate their own satellites. Most would want their own satellites, but affordability has always been an issue. The MicroGEO brings the cost down well below $100 million if they wish to own their own satellite and the ISN allows them to lease a whole or a part of the satellite. There is a significant pipeline of countries and commercial customers for these assets.

VIA SATELLITE: Playing devil’s advocate, why would customers look at these GEO satellites over a LEO alternative?

Choi: LEO systems have the advantage of low latency but at a higher cost of user terminals that provide lower availability due to Earth fade — signals being blocked by trees, buildings, mountains, etc. — while GEO satellites have the advantage of high availability, lower user terminal costs and with MicroGEO and ISN lower service costs. In the best world, countries would and should operate a multi-orbit approach with their ground systems by using a satellite antenna that can take advantage of GEO and LEO systems to enjoy both lower latency and high availability. If lower latency wasn’t such an issue, then a small GEO would be the lowest cost alternative to bridge the digital divide.

VIA SATELLITE: One of the big conversations is the cost of the ground piece. There has been lots of talk about open standards and a move away from proprietary/closed systems. What are your views on this?

Choi: This would be a good idea to lower costs and risks to the end users. GEO satellites today are mostly agnostic to ground technologies as they are bent-pipe or transparent systems. This will be the case for the MicroGEO and ISN. DVB-S2X is a ground standard that we hope more service providers adapt. LEO systems seem to be more closed than GEO. The customers should demand open systems so that their investment in ground infrastructure can be used across multiple orbits and constellations. I believe at least one manufacturer will come out with an affordable integrated antenna that can track satellites at LEO, MEO, and GEO with programmable baseband modules that can be made compatible with different constellations.

VIA SATELLITE: How big do you believe the market is for small GEO satellites?

Choi: This has been discussed by many companies in the past but there really are 3 billion people who are not connected right now. Figuring out a way to cost effectively address this market is a trillion-dollar opportunity. The MicroGEO and ISN gets us one step closer to addressing that demand. NSR states that by 2030 the global Fixed Satellite Service (FSS) capacity demand (LEO and GEO) will be over $20 billion. We believe that small GEO will pay a significant role in that sector.

VIA SATELLITE: Finally, how do you see the satellite industry evolving over the next two to three years?

Choi: It is an exciting time in the space industry, so many new business models are being funded and companies with zero revenues are able to go public. Even Apple [is rumoured to be] making their iPhones satellite compatible. How wonderful is that? Of course there will be a shakeout but certainly there will be new parties setting the agenda for the global connectivity race.