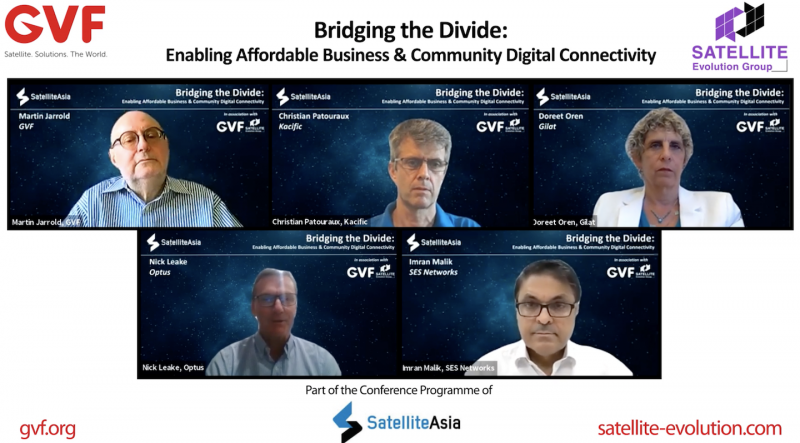 Bridging the Digital Divide panel at SatelliteAsia, as part of Asia Tech x Singapore, on July 14. Screenshot via SatelliteAsia

Satellite executives highlighted the importance of working with global governments to bridge the digital divide and provide connectivity to remote areas. Satellite connectivity is known to be an attractive option for bringing connectivity to areas that can’t access terrestrial networks, yet there are still a number of hurdles to deploy satellite.

“Connectivity is a means to an end, it’s what system you put into place in order to answer a particular market. But first thing’s first is the willingness of that market to pay,” Christian Patouraux, CEO of Kacific during a SatelliteAsia panel as part of Asia Tech X Singapore.

Patouraux said universal service obligations (USOs) are ideal to bridge the digital divide quickly in developing areas because these programs centralize funding, and take on the work instead of relying on individual villages to determine how to pay for service and share infrastructure.

Nick Leake, head of Satellite and Space Systems for Australian telco Optus, applauded the Australia government for providing subsidies to connect remote communities. He mentioned the Mobile Black Spot Program, through which Optus and the government co-funded a mobile network. In remote Aboriginal communities or eco lodges, Optus would deploy a mobile backhaul using small cell technology, which is more economical than building a mobile tower.

SES Senior Vice President of Global Sales, Fixed Data, Imran Malik, agreed on the importance of USOs, and added that it’s up to regulators to facilitate roll-outs and make spectrum available. He said countries experience success when they level the playing field between foreign and local operators.

Indonesia and the Philippines are examples of nations that have allowed foreign satellite operators like SES equal access to deploy networks.

“They recognize that there is a need and a national urgency for these kinds of networks to be deployed, and time is of the essence,” Malik said. “The end result is that networks have been deployed very quickly. Whereas, there’s certain countries where the access is blocked by the regulator. There is a genuine need for these networks, but things have slowed down because the domestic operators don’t have the capacity to do this, and foreign operators are not allowed to come in.”

But even as satellite capacity is more available and cheaper with High-Throughput Satellites (HTS) and Low-Earth Orbit (LEO) satellites coming online, the right hardware is necessary to provide fast and reliable connectivity in a cost-effective way, said Doreet Oren, senior director of Corporate Communications for Gilat Satellite Networks.

To that end, Gilat offers technology that provides high bandwidth efficiency to maximize throughput, and bandwidth management and prioritization. These technologies can reduce cost and benefit end users in the developing world.

“It’s not enough just to be connected, you need to provide internet connectivity at the level that supports the data intensive applications,” Oren said.