Connectivity as a Service Will Enable the Internet of Everything

Connectivity as a service is coming, and it’s going to change the way we think about being online as profoundly as cloud computing is transforming business and information technology.

Cloud computing isn’t just big business — it’s made whole categories of other businesses possible. Netflix is often cited as the biggest single customer of Amazon Web Services — but the reality is that the entire video-streaming ecosystem runs in the cloud.

Beyond streaming, software we used to buy and run on computers on premises increasingly available, or solely available, as a cloud-based service. Think Microsoft Office, or Adobe Photoshop. On the business-to-business side, CRM, ERP and the whole alphabet soup of enterprise software is in the cloud or moving there fast.

This allows businesses to retire or scale back their on-premise server rooms, adjust more quickly to changing business conditions, and buy only what they need in terms of computing power, storage and the like. What’s more, cloud computing has fueled the growth of disruptive software startups by allowing them to grow rapidly without having to make massive up-front investments in infrastructure just to get off the ground.

Similarly, connectivity as a service is bringing this same flexibility to the ways we connect devices to all that data and compute power. It means that if a streaming service wants to supply bandwidth for its customers, it can buy that connectivity the way it buys storage today. It opens the floodgates for innovative businesses to buy and use otherwise unwanted bandwidth — connectivity that goes begging at 4 a.m. or in remote locations because the big carriers worry more about maintaining their retail ARPUs than making efficient use of their networks.

Likewise, it means variable and dynamic pricing for satellite connectivity, allowing constellation operators to fully sell-through their installed capacity, and selective buyers to avail themselves of otherwise unsold capacity at attractive pricing. It means, fundamentally, creating a “pool” of connectivity that businesses can buy into and sell out of as their business requirements dictate.

This flexibility will, in turn, drive the next leg of the ongoing communications revolution. It will allow enterprises to buy connectivity for private networks with unprecedented flexibility. Enterprises without networks of their own will also be able sell connectivity products to their customers — or offer it as an add-on to the services they already provide, rather than depending on those customers to purchase connectivity from network operators.

The past 15 years have been the smartphone era. For a decade and a half we’ve built networks and devices to power the internet in our hands. The smartphone era swallowed whole industries whole — from the cellphone incumbents to point-and-shoot digital cameras and is nipping at the heels of broadcast television and movie theaters. The next leg of this journey isn’t just about better phones and faster downloads. Nor it is simply about connecting the next three billion. It’s about the next 50 billion devices, communicating with us and with each other in ways as hard to fathom as TikTok was at the turn of the century.

But to get there, we need to reconceive who connects us and how it’s paid for. The incumbent carriers and constellation operators will need to ditch their ARPUs and judge themselves instead on optimizing network utilization.

The cloud computing ecosystem was built in part on the spare capacity that the web giants needed to run their businesses, but which also left them with compute and storage to sell, or rent, even to competitors or potential competitors.

The rude economic truth is this: We can’t build the ubiquitous, high-capacity networks we need on the existing model of duplicative, wasteful network investment and siloed, retail-centric business models for selling that capacity. We need more creative approaches to building and monetizing both terrestrial and orbital networks, where operators see all their capacity as an asset to sell, rather than merely a resource reserved for their retail subscribers.

Operators build, in effect, multibillion-dollar factories for making and delivering bits, and then they run them at a third, or a quarter, or less, of their total capacity. The way to end this waste is through more flexible and dynamic pricing, the ability to buy and sell capacity on a wholesale basis, and a much greater diversity of companies that can be considered, and think of themselves as, internet service providers. The smartphone era is giving way to the internet of everything. But connecting everything will mean new ways of doing business for everyone in wireless communications. 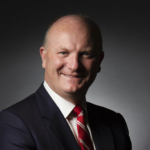 Declan Ganley is the chairman of Rivada Space Networks. Ganley is primarily a telecommunications entrepreneur, having built businesses across Europe, Russia, and the United States.