Universal Broadband: Is Satellite Key to Bridging the Digital Divide? 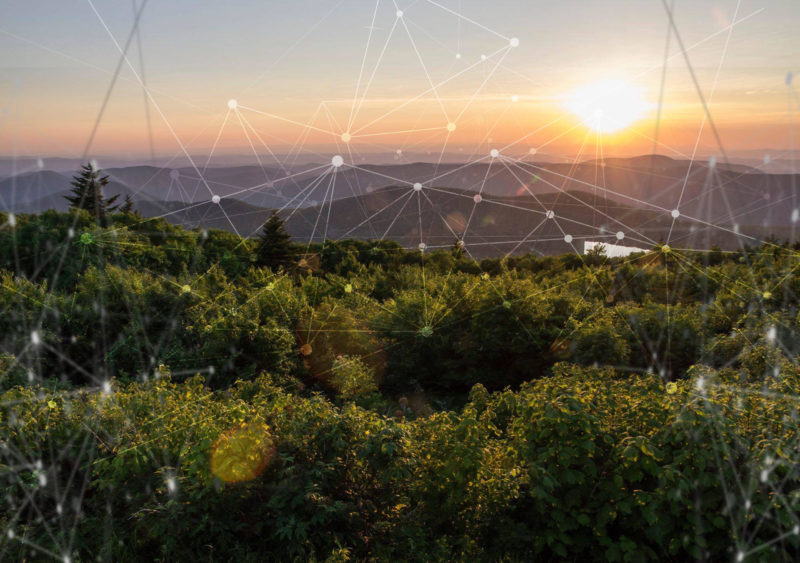 Following the widespread effects of the COVID-19 pandemic that has impacted the daily lives of billions of people in the past year, the world is in a critical moment in history with regards the development of the broadband ecosystem and accelerated efforts to bridge the digital divide. Access to broadband services is increasingly recognized as a driver of economic growth, as it contributes to a country’s education and political systems. Also, public services such as remote health advice and tele-learning are improved with the availability of communication networks. Due to the benefits associated with broadband services, international organizations are encouraging infrastructure development plans and government promotion of broadband use and accessibility in remote and unserved areas.

In many countries, the extension of direct fixed line service networks to individual households is included in universal access targets, with governments adopting multiple strategies to accomplish such connections. Despite these targets, many people still cannot access broadband services or can only access broadband services outside of home. With the growing importance of internet in our daily lives, data communications at a rate “suitable” for internet access has been added to Universal Service Obligations in a growing number of countries in recent years.

Significant progress has been made globally in recent years in expanding access to and adoption of broadband services. This is highlighted by the strong growth in total individuals using the internet. In the past ten years, the number of internet users doubled to approximately 4 billion people in 2020. Despite the positive trend, digital inequities still exist and have in some cases been accentuated by the COVID-19 pandemic. Digital inequities and uneven access to broadband services exists not only between countries, but frequently as well within countries. The broadband ecosystem will be central in building the post-COVID world, notably by making sure universal equitable access to broadband services is part of the new normal, which is currently far from the case.

Of the 7.8 billion world population, 46% remains unconnected, with most of this population concentrated in developing regions. The unconnected population is predominantly offline because of cost considerations. This is either linked to the lack of financial investment in network infrastructure extending service to those areas, or to the fact that available services remain prohibitive. Overall, the price of internet-connected devices and services has decreased in recent years, but this decrease remains insufficient in many countries to reach the objectives set by international organizations. Barriers, such as access to electricity, skills, and literacy also have a significant impact on internet penetration. 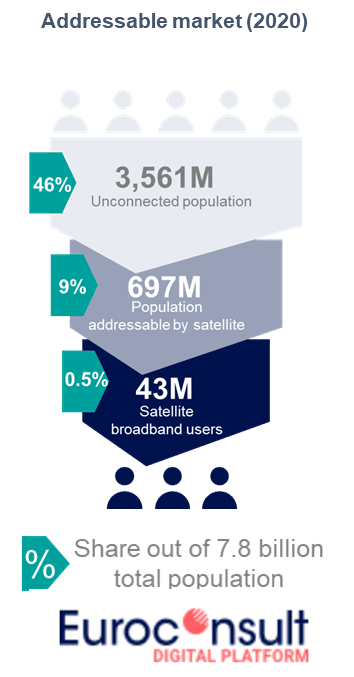 Satellite Has a Key Role to Play

Satellite has a central role to play in this post-COVID-19 world as many geographic areas around the world remain unconnected or under connected. Three satellite solutions are used to address the market: rural connectivity such as community Wi-Fi hotspots, consumer broadband, and cellular backhaul.

Despite the ubiquitous coverage offered by satellites, the total number of people connected to internet by satellite solutions remains relatively limited today. Apart from affordability of services, the key challenge attached to satellite usage/adoption is the high recurring operational costs associated with capacity leasing, which represents the vast majority of operational costs. In 2020, 43 million people were connected to broadband services via satellite solutions with the total number of users expected to be multiplied by 2.5, to 110 million in 2029. New satellite technology will lead to improved economics enabled by lower capacity pricing that are expected to drive higher data rate requirements. This will make satellite solutions more attractive and competitive vs. terrestrial solutions.

The value proposition of next-generation High Throughput Satellite (HTS) systems has improved drastically over recent years, however continued progress in the cost base and pricing levels of HTS capacity are required to continue supporting narrowing the gap between satellite services and legacy terrestrial networks. Further drops in the cost base of satellite capacity and associated end user pricing levels are expected with the entry into service of VHTS satellites (KONNECT VHTS, Viasat-3, etc.) and Non-Geostationary Orbit (NGSO) constellations.

The improved economics enabled by lower capacity pricing are expected to drive higher data rate requirements at existing satellite sites, while also unlocking new opportunities. HTS systems are, for example, a condition for the use of satellites to support 5G network deployments. In addition, NGSO constellations are also expected to unlock new growth opportunities for latency-sensitive applications like cellular backhaul. This will be key for the development of the satellite universal broadband access market as it is a market with a relatively high price sensitivity.

Universal broadband access satellite services have observed strong growth in recent years, with both the number of users/sites and capacity usage per user increasing over time. This alongside the significant addition of lower-priced HTS capacity has contributed to the tripling of satellite capacity usage between 2015 and 2020. Consumer broadband services account for most of the capacity leased at 86% of the total in 2020 and North America, the world’s largest consumer broadband market, accounted for just over 60% of total capacity demand in 2020.

With the launch of new generations of satellites, the addressable market for satellite should grow in coming years globally and satellite will be a key part of the push to decrease the number of unconnected people. Overall, the negative impact of growing terrestrial deployments should be counterbalanced by improved services that should lead to satellite services increasingly targeting under connected areas closer to urban areas aside from rural/remote areas. Despite technological improvements and the global push by governments and international organizations to connect everyone, universal broadband adoption is not expected by 2030 and may even be decades away. In any case, satellite will be a key part of the equation when the digital divide is finally bridged. 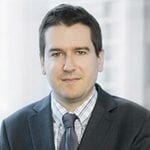 Dimitri is a senior consultant at Euroconsult, based in Montreal, Canada. Since joining Euroconsult in 2007, he has managed and contributed to more than 50 consulting missions for a wide range of international clients including satellite operators, service providers and investment funds.

The first Universal Broadband Access report from Euroconsult is a complete analysis and forecast of the satellite broadband market. It includes a detailed discussion of the addressable markets, a strategic analysis of the economics and opportunities, a comprehensive market assessment, and a market forecast through 2029.