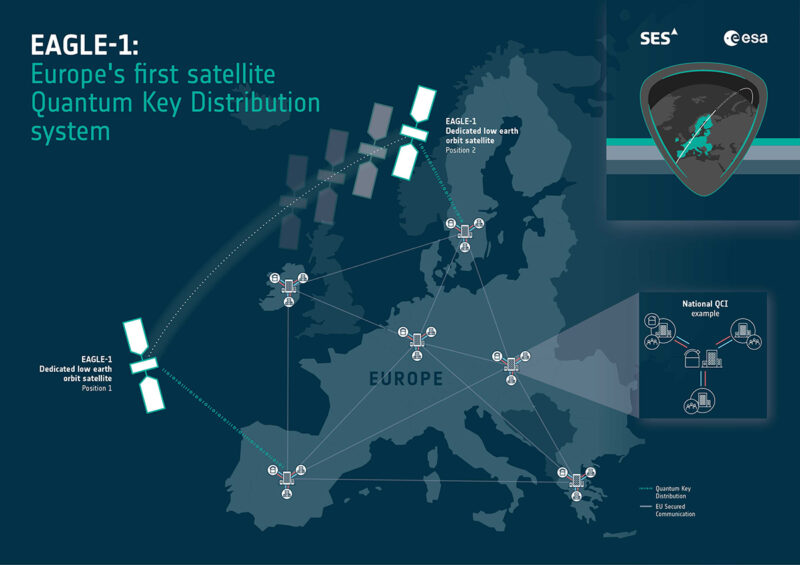 SES has signed a new launch deal with Arianespace for its EAGLE-1 satellite, a LEO satellite, which will support the end-to-end secure Quantum Key Distribution (QKD) system for Europe. The deal was announced Nov. 9. The satellite will be launched on a Vega C rocket from French Guiana as early as Q4 2024. The EAGLE-1 project comprising satellite and ground infrastructure, is being developed by SES and its consortium of 20 European partners, with the European Space Agency (ESA) and the European Commission support.

Following the launch, the EAGLE-1 satellite will complete three years of in-orbit mission supported by the European Commission. During this operational phase, the satellite will allow European Union governments and institutions, as well as critical business sectors, early access to long-distance QKD that would path the way towards an EU constellation enabling ultra-secure data transmissions.

Vega C, the new European light launcher successfully passed its inaugural flight on July 13 and now enters its operational phase under the responsibility of Arianespace. With this contract, Vega C backlog includes over 40 satellites contracts.

“Building the EAGLE-1 end-to-end system for secure data transmission and validating the long-distance Quantum Key Distribution technology is an innovative project that will benefit the EU Member States. We have been working with Arianespace for decades to deliver our satellites into space and are delighted for them to be onboard to launch the EAGLE-1 satellite into orbit,” Ruy Pinto, Chief Technology Officer at SES, said in a statement.