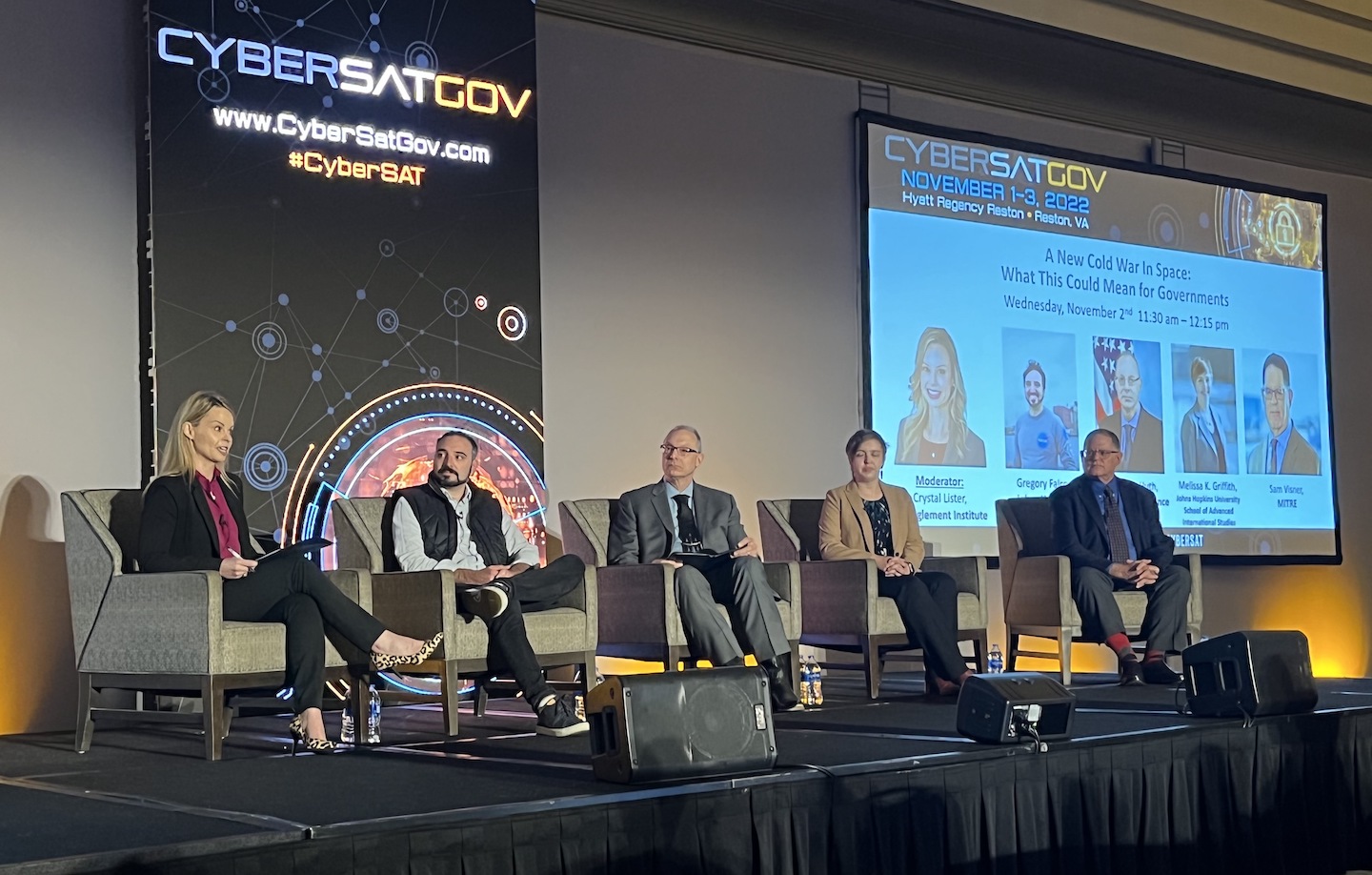 RESTON, VA — The United States is in a new Cold War era. It may be a bold statement, but it is one that the vast majority of attendees at the CyberSatGov conference agreed with on Wednesday, by a show of hands.

In a discussion Wednesday in Reston, Virginia, about geopolitical threats in the space environment, a group of speakers from the Defense Intelligence Agency, MITRE, and Johns Hopkins University analyzed the threat landscape. While Russia is top of mind in terms of threats because of the recent ASAT test and the war in Ukraine, some experts are more concerned about China.

Sam Visner of MITRE Corporation, said that China worries him more than Russia because of the nation’s integrated, global strategic approach and how it could extend to space. Visner believes China is working to make its surveillance state global. China sees cybersecurity as the protection from outside information, versus protecting information, he said.

“As [China tries] to build a global information and technology infrastructure, that infrastructure can allow other countries to adopt their digital authoritarian regime,” Visner says. “If China attempts to extend this infrastructure into space — they’re going to build their own LEO satellite constellation — then they’ll be using space as a way to reinforce this digital authoritarian rule and their version of the international system. [Their system] exists in stark contrast to the international system that we and other liberal democracies have attempted to support.”

Dr. John Huth, chief of the Office of Space and Counterspace for the Defense Intelligence Agency, also emphasized China’s focus on information, cyber and space. He pointed to China’s creation of the Strategic Support Force (SSF) in 2015 as the fifth branch of the military, centralizing space, cyber, and electronic warfare capabilities.

“They became more formalized,” Huth said. “It’s that information aspect that we really emphasize. They are also clearly in an economic boon to be able to carry out what they’re carrying out, where Russia is more conservative, more constrained.”

Visner outlined key differences between the current situation and the Cold War, in which there were signals of what countries considered red lines not to cross, followed by confidence building measures to avoid conflict. Those red lines do not exist in the same way today, he said.

The U.S. needs to define its red lines in terms of space systems, Visner argued. This is a pressing issue — just last week, a Russian official said U.S. and allied commercial satellites could become targets if they are involved in the war in Ukraine.

“We are increasingly dependent on our space systems. I would argue that space systems are critical to our economic and national security. Assuming we believe that, we have to understand what are the red lines associated with attacks or exploits against them,” Visner said. “Since we haven’t yet established that firmly and in a way that is sufficiently transparent that our potential adversaries know — this differs from where we were in the Cold War. It leads to the possibility of greater instability and miscalculation.”

Gregory Falco, assistant professor at Johns Hopkins University, who studies critical infrastructure and space systems and was involved in creating Space Policy Directive-5, said Iran could be a “sleeping giant” in terms of space that gets ignored while the U.S. is concerned about Russia and China. The nation has demonstrated space capabilities, intellect, and passion about space.

Overall, Falco said he has seen “a huge uptick in interest from [other countries] in getting American access to technology, intellectual power, and research,” Falco said. He shared an anecdote that he and other academics track where people are reading their research, and it’s often from outside of the U.S. In the past couple of weeks, he has only received hits from Russia. Others report views from China. “It’s actually very few hits ever from the U.S., no one cares,” he joked.

When it comes to the global race for capabilities, Falco believes the U.S. has a more dynamic innovation and creativity ecosystem that allows the nation to see 10 to 20 years into future technology developments, versus some other countries. But at the same time, the U.S. should also be cautious about who it allows into its “intellectual home,” Falco cautioned.

“I’m not trying to say we should keep foreigners out. But we need to figure out how to keep them in the country, the folks who want to make contributions to our national security and intelligence capabilities in space,” Falco said. “You can’t just send them back with a PhD after building out some cool stuff and then [take] it back to Europe or Asia, or wherever. We need to think about how to keep what we are good at here. I don’t think we are doing that right now.”